The next concert after Guadalajara was in Oaxaca, and getting there was one of the worst days of my adult life. Because of a recently deceased Mexican airline, there were not enough available seats for the whole orchestra to fly to Oaxaca. So, half the orchestra (as bad luck would have it, my “half”) had to get up at 5 a.m. (this after being returned to the hotel at midnight after the concert the night before, by the same bus driver that got lost TWICE trying to find the concert hall that afternoon) to catch a flight to Mexico City, whereupon we all boarded a bus for the supposed-5½-hour drive to Oaxaca. Instead, it ended up taking NINE HOURS, culminating in a blazing convergence of incompetence and stupidity as we sat on that damn bus in the middle of a busy road for an hour and a half while a key to the gate of a hotel was searched for. The only thing that could save that day from utter wrack and devastation was a great meal. Fortunately, I got it.

Many, including Rick Bayless, have sung the praises of the Casa Oaxaca restaurant, and for good reason. The setting, an 18th-century manor house, is stunning, the flavors fresh and unusual, the execution superb. Normally this kind of restaurant would fall outside the scope of this blog, but the favorable exchange rate meant that the Menú degustación “oaxaqueño contemporáneo”, plus wine, ran about 40 bucks a person—-an almost ridiculous bargain. It entailed six courses, plus a teaser of crispy blue corn tortillas with (from bottom to top) guacamoles, spicy rajas, and tomatillo salsa. 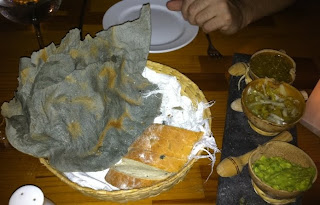 First up was rollitos de hoja santa-—taquitos made with an anise-like herb... subtle and delightful. Then came mole verde con lechón-—green mole with suckling pig. Lovely, although the flavor of the sauce was a bit muted for my taste (I freely admit my bias toward bold flavors). Next was to have been amarillo de venado (yellow mole with venison), but through an oversight it never arrived and we didn’t realize it until the end of the meal, so we never got to try it. 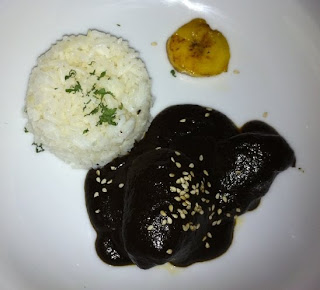 Neither Kerrick nor I had ever tasted a mole of such complexity and depth and... well, it was simply stunning. And turkey breast was the perfect foil for it: contrasting light flavor, yet a bit more substantial than, say, chicken would have been. For a few blissful moments, the hideous memory of the Bataan Death March plane/bus ride was erased. 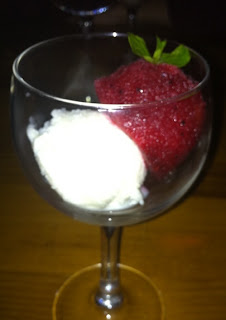 Desserts tend not to be my thing, and though good for what it was, this definitely was not my cup of tea. The mezcal digestif that followed, however, was.

All of this was accompanied by a bottle of Palo Alto reserva, a cabernet/camernere/syrah blend from Chile... 2009, I believe it was. Normally I would have wished the wine to be not quite so young, but its almost-brashness turned out to go quite well with the huge variety of fresh flavors that evening.