There has been a flurry of comments on the Chowhound boards lately about Deyi Peking Duck House in Flushing, and since I had been curious about Beijing-style food for quite some time, it seemed like the perfect introduction. So, a couple of game friends and I headed out there a few nights ago--Pete and I got there on time, but Alicia was going to be... *ahem*... "delayed" by at least 45 minutes. What to do... go in and start ordering anyway? Go for a stroll? It was then that eagle-eyed and intrepid Pete noticed the restaurant next door with no visible English signage, and before I could turn around, he was inside chatting with the manager. Eventually, we espied two English words in the window: the adopted English name of the establishment, Spicy Road.

It was quickly decided we should have a couple of appetizers here while waiting for Alicia, then move next door to our original destination when she arrived. The meal that followed at Deyi was good, but the appetizers at Spicy Road inspired us to return the very next night. Deyi specializes in, obviously, Peking Duck, but also a huge variety of Beijing-style banquet dishes. Spicy Road (the Chinese characters of its name translate as "Tianjin Beijing Restaurant"), on the other hand, serves more everyday Beijing-style cuisine (Tianjin is about 85 miles from Beijing), and there are very few dishes that appear on both menus. I find Spicy Road's fare far more interesting and satisfying... I guess I'll always be a peasant at heart.

In the course of two visits we were able to sample a wide variety of dishes, leaving us wanting to try more. Everything was deftly prepared with fresh ingredients. This part of China is known for its dumplings, and this place is right in line with tradition. The pan-broiled lamb dumplings were delightful and could hardly have been improved upon. (Many thanks to Pete for the photos.) 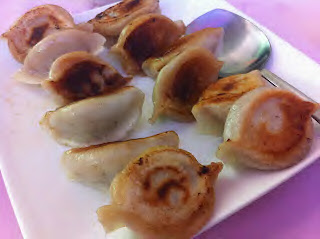 The Tianjin pork-stuffed buns--a house specialty--arrived in a bamboo steamer of six light, fluffy buns with an excellent filling. Yet these were somehow a bit less successful than the dumplings. I like a meat bun to be one integrated unit... perhaps I'm applying a false Western standard here--don't know--but when the pork filling has shrunk enough during steaming that it simply falls out when you bite into it, I find it a bit annoying. Still, delicious.

Based on one of the pictures projected on the television screen on the back wall, we ordered the pork with Chinese pickle noodle soup, which turned out to be... exactly what it says, plus a splash of rice wine. Lovely. 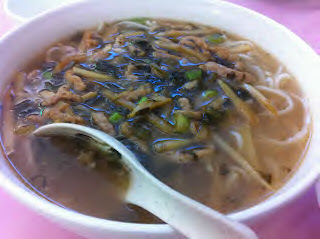 Chongqing Spicy Chicken, a house specialty, is a very northern Chinese take on a Sichuan dish. Every version of this I've had in a Sichuan restaurant has been bound together by a bit of oil. Spicy Road's is totally dry--and unbelievably flavorful. This dish was really hot, thanks to both a generous handful of dried red peppers and thin slices of fresh green hot peppers. 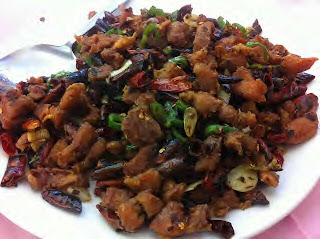 Shredded duck in oyster sauce turned out to be tasty bits of duck (in oyster sauce, true to its name) with sauteed bean sprouts and shredded fried egg, accompanied by fresh mooshu-style pancakes, and the attendant hoisin sauce. Final result: by far the most delicious mooshu I've ever tasted! 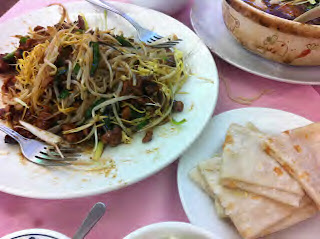 The soy sauce beef tenderloin casserole was another winner, although "tenderloin" was definitely a misnomer. It's made with the usual cut of stew beef--plus, of course, the "rind", for lack of a better word--stewed with Chinese cabbage, cellophane noodles and red pepper in a perfectly-balanced soy sauce broth. 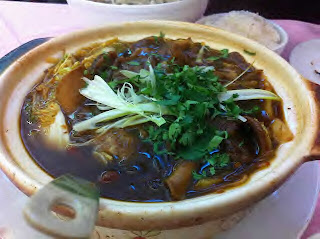 Pete got an order of sliced fish in spicy sauce to go, which he reports was stupendous. Sizable slices of fish, lightly-breaded and fried, then tossed in peppery blend of spices with a hint of cumin. I have to say, it smelled great in the car on the way back! Do not be misled by the term "sauce" on this menu--here, it usually means something like the aforementioned, not some form of liquid (just so you won't be unpleasantly surprised).