Hamburgers are not something I will be writing about often on this blog. They certainly are the rage these days all over New York City, though. But why an outfit like Shake Shack, for instance, warrants all they hype (or the now 7 locations in NYC, or 12 worldwide, including one in Dubai!) is COMPLETELY beyond me. Gray, slightly dry blocks of ground meat (you cannot request doneness there) are not, and will never be, my thing and I utterly fail to understand their mass appeal. Unless a hamburger is closing in on a half-pound of meat and is red in the center, you can keep it. Unless it's White Manna.

Did you ever wonder if White Castle hamburgers were ever any good? I'm guessing they actually were, over a 80 years ago. According to the Wikipedia page, when they began, they made their hamburgers exactly the same way the White Manna does now:  throw some sliced onions on the hot grill, place a small ball of freshly ground beef (at White Manna, it's still red - you can watch them do it) on the onions, smash the ball into a patty, flip, place the bun on top so the flavors can steam into it, assemble with pickle slice, and serve. But White Castle abandoned the idea selling real food in 1931 when they switched to frozen hamburger patties (the hideous five holes were added in 1951). 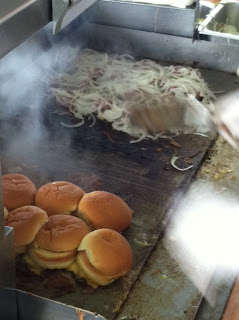 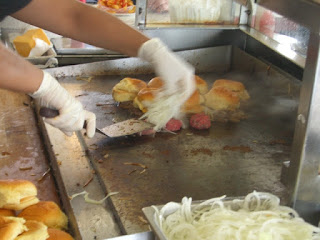 First opened in 1946, White Manna was once a mini-chain of five diners in New Jersey. Now there are just two left - the one in Hackensack, and the original location in Jersey City (which is the historic diner building of the 1939 World's Fair in Flushing Meadows). Word on the street is that the burgers at the Hackensack location these days are significantly better. I believe it - they are divine. Sliders made of freshly grilled, freshly-ground beef with grilled onions, American cheese (if desired, and I do), on a steamed fresh potato-flour bun... what could be better? If I can't have the half-pound, almost-mooing slab of red ground meat, this is the next best thing. And there are times when it is THE best thing. 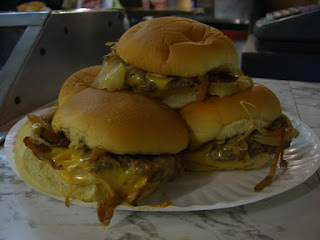 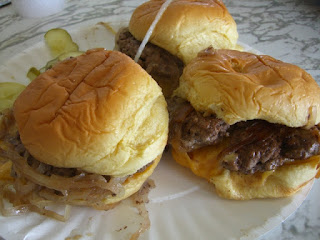 These heavenly bites are, to my mind, worth the trip from just about anywhere, and I often take the NJ Transit bus (165 from Port Authority to Passaic St.) when I can't interest anyone in driving me. It is well worth the effort EVERY time.

After that description, I'm ready to get on a plane for these.

I ate at the White Manna at JC - on Tonnelle Ave. Definitely NOT worth the time unless you are in the area and suuuper hungry.

You will probably NEVER see a line out the window. Locals don't go there and that "original" place doesn't seem like it stays busy.