If there is one restaurant that sums up what is for me the essence of Asturias and its food and drink, it is Tierra Astur in Colloto, on the outskirts of Oviedo. If you’re anywhere nearby, grab as many people as you can and GO, and be prepared for a hedonistic binge of consumption. It’s one hell of a party!

It is, first and foremost, a sidrería (pictures from their website): 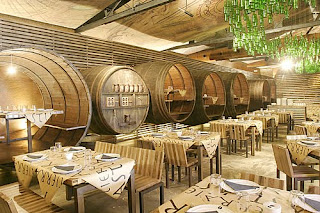 The design of the Colloto location—converted from the old Águila Negra beer factory—is fantastic, and the “wall of water” is an ingenious modern take on a traditional way keeping the sidra at the proper temperature, which I first experienced at an outdoor chigre in Soto de Agues, tucked next to a puente de piedra with the bottles chilling in the stream. 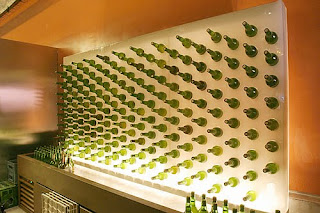 Here one can enjoy sidra escanciado, or “de espicha” (from the tap): 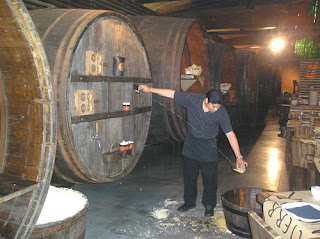 You won’t find sidra de espicha just anywhere, so I suggest trying it here. It also has the advantage of being “all-you-can-drink” for one quite modest price, as opposed to paying by the bottle.

The menu is huge, and everything is listed, charmingly, in bable asturiano and castellano. Stick as closely as you can to the traditional parrilla fare—it’s what they do best. For starters, they have a wide selection Asturian embutidos (cured meats of various kinds)… try everything. As much as I love it, this probably isn’t the place to get jamón ibérico. It’s decent quality—not the best—but sliced by machine and not by hand. The same weight goes farther that way, but the texture, and therefore the flavor, isn’t right. But with all the other great cured meats and sausages you shouldn’t miss it.

Hopefully you’ve arrived with enough people to warrant ordering the parrillada, a veritable avalanche of food that easily feeds 5-6, and a bargain at €38: chorizu criollu (light-colored pork sausage), chorizu roju (red, paprika chorizo), morciella fresca (blood sausage), pitu (chicken), costiella de gochu (pork ribs), costiella de xata (beef ribs), llacón (pork hock), churrascu (cross-cut beef rib), entrecó de carne roxa (beef entrecote), paletilla de corderu (lamb), pimientos (roasted red peppers) and fried potatoes. They do a good chuletón de güe (ox chop) here, too. It may not be up to the high quality of Nozana, or even El Quesu in nearby Bobes (Siero), but it's better than adequate. The items from kitchen (as opposed to the grill) tend not to be nearly as good. There’s an incredible selection of Asturian cheeses for postre (once again, don’t bother with the kitchen dessert items).

There are three locations at this point, and for my money the Colloto one is by far the best (if you go, you may be lucky enough to be waited on by Cristina, who will give you some cheeky auténtico asturiano banter while doing a great job). There’s also one in El Bulevar de la Sidra (calle Gascona) in Oviedo, and a newly-opened location on the Playa de la Poniente in Gijón—say hello to my friend Saulo if you hit that one!