Along with Oaxacan food, probably my favorite regional Mexican cuisine is Yucatán-style food. It’s almost impossible to find in the U.S., and even in Mexico City, places to sample it don’t seem to be particularly numerous. Luckily, just around the corner from where we are rehearse is a Yucatán restaurant – probably the best know one in they city, Coox Hanal. 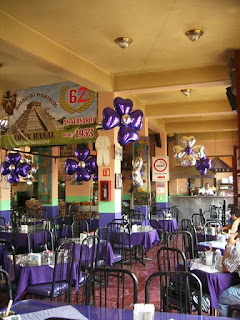 The somewhat unusual name, according to the back of the menu, means “let’s eat” in the Mayan language. And here, it’s a most excellent idea. We started with one of the best-known (for good reason) yucateco dishes, panuchos de cochinita pibil. Essentially small, open tacos with a layer of refried black beans, topped with shredded suckling pig pibil and slices of cebolla morada (marinated purple onion). Pibil is the Yucatán preparation – meat that has been marinated in citrus and braised in a sauce of annatto seeds (achiote), which gives it its almost startling orange-red color. These panuchos are wonderful, with just the right balance between slightly crispy fried tortilla, frijoles, and luscious pork. 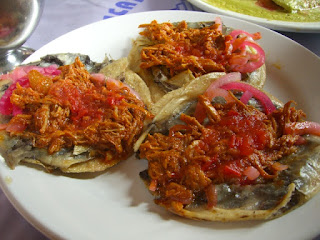 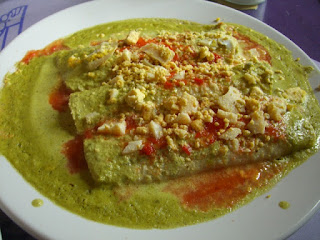 Even with this stellar preamble, the star of the meal – and yucateco cooking, as far as I’m concerned – is chamorro pibil (pork shank). One is served a whole shank on an oblong plate, bathed in plenty of the pibil braising sauce. Eat with corn tortillas, cebolla morada, and, for spice lovers like me, some the wonderful homemade chile habanero sauce on the table. Easily in my top 10 favorite dishes of all time. 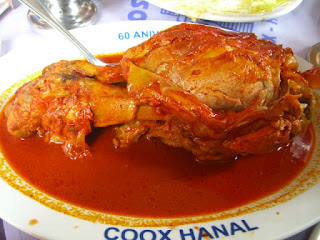 I was in such ecstasy from what had come before that I forgot to get a photograph of the pan de cazón con salsa de jitomate. It’s not a particularly distinctive-looking dish, in fact – two corn tortillas filled with chopped fish, covered in tomato sauce. But the cazón, a smaller member of the shark family (I used to eat sopa de cação, a staple dish of Alentejo cooking, in Portugal) and the brightly-flavored tomato sauce are an inspired combination.

Lunch here the very next day included all of the above, plus the somewhat odd-looking rellenos negros. These are tortillas (surprise!), filled with shredded turkey, covered in a black sauce. The sauce is black because of a condiment recado negro, the black component of which is chiles toasted until... they are completely black. The final flavor, though, is quite mild. I found myself wishing that this particular sauce, however, was a bit less watery. Still, a very nice – soothing, even – flavor. Those are wedges of hard-boiled egg swimming alongside. 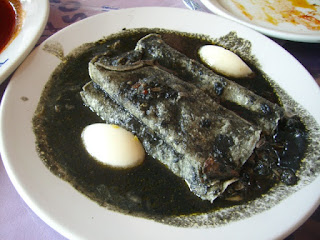 Like so many restaurants in Mexico City, this one closes by 6:30 in the evening. A pity - this would be such a great place for an festive evening meal.