For all your cow's foot needs...

My friend Elizabeth – who is here in Mexico singing the living crap out of Salome – liked the duck tacos she had at El Cardenal so much that she decided to order some duck tostadas at Fonda Santa Rita this evening.

What she was presented with a few minutes later slightly horrified her. 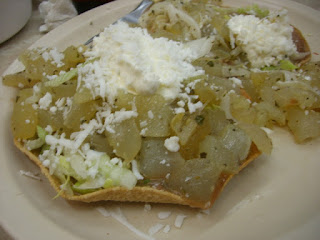 She exclaimed, “It’s all fat!” I thought to myself, “That does NOT look like duck fat... besides, duck fat is delicious!” After a bit more discussion, I finally asked her to point to what she ordered on the menu. Tostadas de pata. “Um, duck is pato. Pata is an animal’s foot.” At first I assumed it was pig’s feet, but I’m pretty sure now it was cow’s feet. The chief discernible seasonings were vinegar and oregano. Not really my thing, and definitely not hers!

In the meantime, I had a very tasty sopa de fideos (noodles in a nice chicken broth spiked with some type of mild, red chile)... 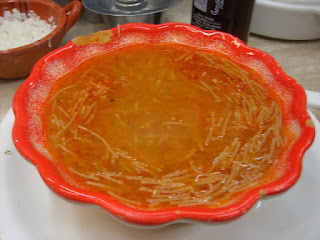 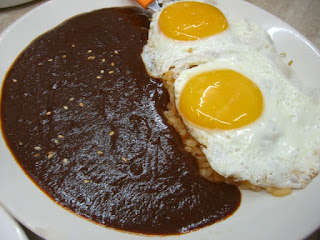 This is a very “local” sort of a joint, with offerings somewhat similar to El Rincón Tapatío, but with a much larger space and more festive atmosphere. The food, however, is better at El Rincón Tapatío (just a couple of blocks away).