I had been told before coming to Mexico City this time (to prepare a Salome for some Orquesta Sinfonica Nacional concerts) that one of the great perks of staying at the Hilton Reforma was the excellent restaurant in the hotel. I thought, “Yeah, fine.” Well, after two meals there, I’m convinced that Restaurante El Cardenal is, in fact, one of the best purveyors of traditional Mexican food in the entire city. It has several branches throughout the city, but the Alameda (Hilton Reforma) location is known to be the best one, and apparently draws people from all over town – even if they live nearer to another outpost

The first meal was upon arrival at the hotel after a much-too-early flight while waiting for our rooms to be ready. At that moment, all I really wanted was a long nap, so the most appealing option was a hefty protein-load. And quite the delightful protein-load it was. 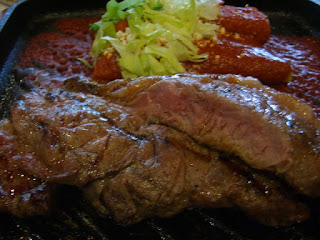 The costilla de res is, naturally, the wonderful grass-fed beef from Sonora. It’s translated on the menu is “ribeye”, but it’s cut differently than in the U.S. – crosswise, like the Argentinian cut tira de asado. It is accompanied by two cheese enchiladas – please expunge all images of enchiladas sold in America from you mind – covered in a palpably homemade tomato sauce. Absolutely delicious, and a relative bargain.

El Cardenal is known for careful and traditional preparation of Mexican classics, using the best recipes. The moles are spectacular, both their tortillas de maiz (corn) and tortillas de harina (flour) are the best I have tasted anywhere, and they have their own bakery that produces their marvelous baked goods. Everything tastes like someone’s mamacita could have made it, placing it firmly in the category of “my kind of restaurant”.

The menu emphasizes Oaxacan moles (as opposed to the better-known-in-America poblano), and there were several around the table – all excellent. The mole negro was better than any I had tasted anywhere, including Oaxaca. By the second meal here, I reached the same conclusion about their coloradito. Since these moles are, essentially, dark-colored goop, they are, hence, not terribly photogenic. 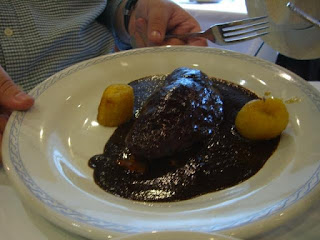 For an appetizer, I had ordered something from the sopas (soups) category of the menu that sounded interesting, although not a lot like a soup: sautéed fideos (noodles) in a light sauce of chipotle pepper and tomato. Well, maybe they meant a kind of broth, I thought. Nope. What arrived was a plate of lightly-sauced fried noodles. Until that moment, I had somehow never heard of the category of dishes called sopas secas (dry soups), which is often a casserole involving noodles. Tasty, but not mind-blowing. And definitely not what I expected!

I began today’s meal with sopa de verdolagas con pollo (chicken soup – a real soup this time – with purslane). Michael and Cameron both ordered it the day before and had been raving about it ever since, so I had to try it. The raves were justified: a light broth with chunks of tender, MOIST white meat (no mean feat – in my experience, the second a restaurant boils chicken breast pieces they get dry) and purslane leaves, a delightful green that actually reminds me a bit of watercress. A squeeze of lime gives it just the right bit of tang. 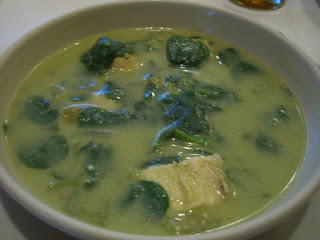 I had immediately zeroed in the barbacoa de cordero as what I wanted for a main dish, but it is served only for two. Luckily, Maestro Recchiuti agreed to share it with me. He proclaimed it to be the greatest thing he’s eaten in Mexico (and he’s been to Mexico half a dozen more times than me), and I agree. It's a shoulder of lamb – which, the English menu explains, has been wrapped in maguey (agave) leaves and cooked by burying it in the ground with charcoal. I'm not utterly convinced that’s the way this was prepared, in the centro of Mexico City. It arrived wrapped in paper, without a maguey leaf in sight, but it mattered not. Before wrapping it up to cook, the skin of the lamb shoulder had been brushed with salsa borracha (“drunken sauce”), a tasty and surprisingly complex concoction made with chiles pasillas and beer. It’s moist, incredibly flavorful, and...just get if you ever get to Mexico City. 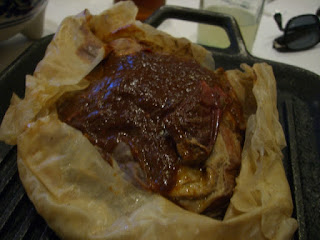 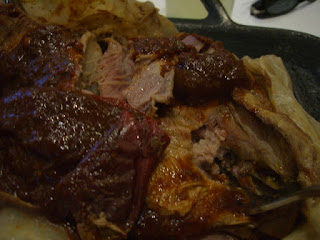 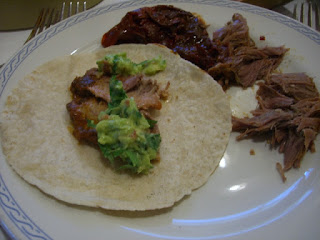 There were, once again, several moles around the table. This time, Peter had ordered a mole verde – chicken cooked with chayote squash and a sauce scented with hoja santa. I copped a taste, and it was marvelous. Once again, better than the mole verde I had in Oaxaca. 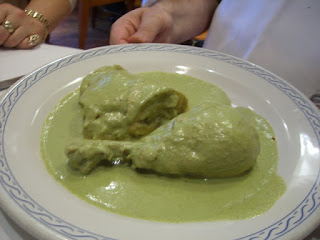 This restaurant is rather expensive by local standards, but (not trying to be the ugly tourist here) for most foreigners, quite reasonable.