Something incredible happened this evening: I was able to show my Asturian food guru (and longtime friend) José Angel a place in Oviedo with good food that he didn't already know. Of course, the only reason I knew about it was because of my friend Dave, the tuba player in the Orquesta del Principado de Asturias.

It's called Bar Lito, and it's one those old-fashioned places I love that looks like it hasn't changed in 70 years. It's a real bar - not a sidrería, so no sidra here - in the casco antiguo, with a comedor upstairs. And the dueña serves up some of the best traditional, home-style cooking in Oviedo. Dave loves the liver here.  I have no doubt that it's excellent, but, although I'm a fairly adventurous eater, a plate of liver has never particularly appealed to me.

Tonight we had a really beautiful tortilla española: 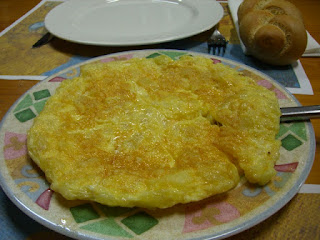 (And note the old-style braided bread in the upper right.)  Perfectly-cooked potatoes engulfed in palpably fresh eggs, not quite set in the center (which is just the way you want it). 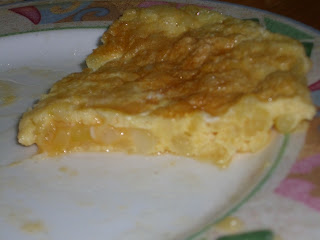 This was followed by a plate of some of the best pollo al ajillo anywhere in Asturias. 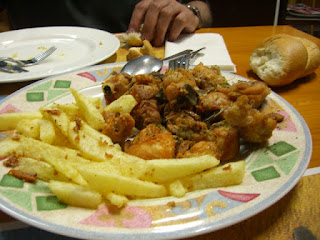 Washed down with a bottle of really good house red wine, it was the perfect midnight snack. At lunch, they serve a 12€ menú. Although a little more expensive than other places around, the high quality makes it unquestionably worth the extra euro or two.

If you read Spanish, there's a lovely tribute to this place on a great Spanish restaurant blog I ran across this evening here. 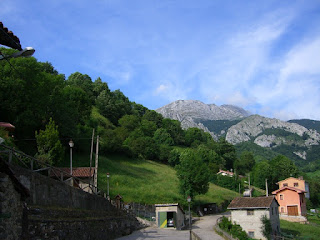 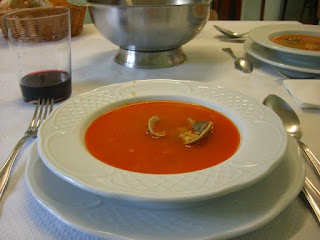 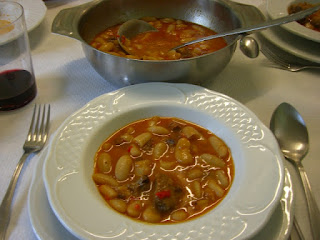 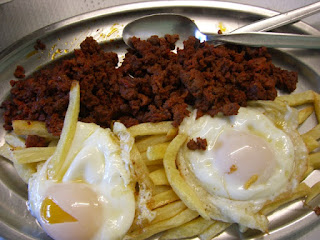 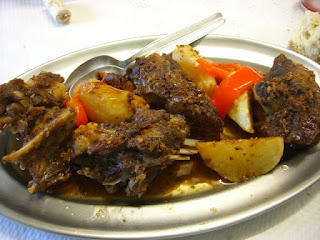 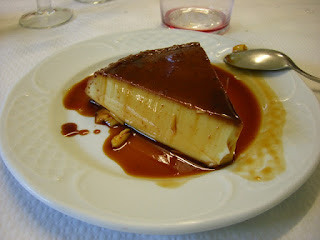 Restaurante Sidrería Tino El Roxu is an excellent place to know about if you're in Gijón. The place has a good feel - usually just crowded enough to be convivial without being so packed as to make being served impossible. The sidra is good (and its eponymous red-haired proprietor has won many a competition for escanciadores), and the kitchen excellent: all the asturiano standards are good here, and at lunch there is an excellent 11€ menú. 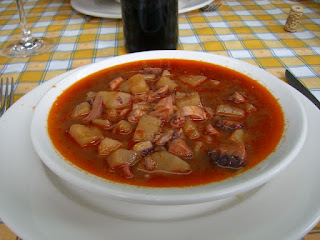 For segundo I chose imperador a la plancha, or a fried piece of red bream, aka alfonsino. Also nice, although cooked a tad too long. 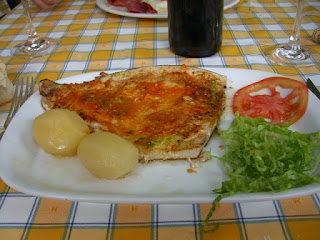 This was accompanied by a bottle of much-better-than-decent house red wine. Dessert, the weakest part of the meal, was a perfectly ordinary flan. This all may not sound like much (although the pulpín con patatas was really great), but it was somehow more than the sum of its parts. I'm happy to go here almost any time.

Edit: It is with great sadness I must report that my favorite restaurant in Madrid is not closed.

During a 9-hour layover in Madrid this week, en route to Berlin, I had time to go into town and have a nice, leisurely comida (midday meal, “midday” meaning 2 or even 3 p.m. in Spain – my kind of place!). When mulling over the possibilities the day before, it hadn’t taken me long to settle on the obvious choice: Boñar de León.

All told, this is probably my favorite restaurant in Madrid, although I readily admit it will not be to everyone’s taste. But for me, it hits all the marks, and hits ‘em hard: huge quantities of hearty, traditional, leonés cooking at rock-bottom prices. Although the rather dingy and forbidding bar up front does not exactly invite one to continue to the comedor in the back, don’t let it put you off. You will be amply rewarded with the best 10€ menú (the wonderful Spanish tradition of a first course, second course, dessert and beverage for one reasonable price) I can think of. A few years ago, I spent much of one summer in Madrid, and once I discovered this place, I ended up eating here at least twice a week – one week I remember eating lunch there every day.

The province of León is separated from Asturias by some spectacularly beautiful mountains, and the spirit of those mountains imbues the cooking. The key dish here is cocido leonés: heavier and more rustic than its madrileño counterpart (my love of hearty peasant food should be a given to my readers at this point), it is the star dish of their Monday menú. The term "stew" hardly does it justice. It is a one-dish meal of potatoes, chickpeas, carrot, cabbage, leeks, chicken, and at least four types of pork products, including (naturally) chorizo and morcilla (blood sausage). It’s all simmered together in a big pot, and the broth, with some fine noodles, is served as the first course. While they generally serve cocido completo only on Mondays, they have sopa de cocido (the broth with noodles) as part of the menú every day, and that’s what I began my meal with. 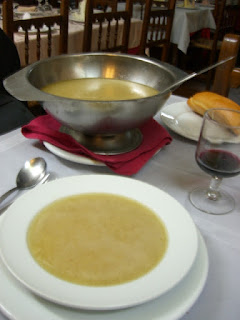 It may not look like much, but the flavor is wonderful. It’s rather like the most amazing chicken soup in the world. And yes, they left the tureen so I could take as much as I wanted - standard practice here.

Usually, I find the primero platos of Spanish menús more interesting than the segundos (and looking around at other tables, the pote gallego, a thick soup of turnip greens, white beans, potatoes, beef and chorizo, looked fabulous, as did the ensalada rusa, a sort of creamy potato salad with a bunch of other goodies in it). But I actually had a bit of trouble deciding on a second dish because too many of them sounded so good (and there are always at least 6 or 7 choices for each course here). In the end I settled on the caldereta de borrego, and it was the right choice: 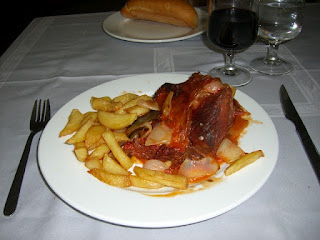 A large chunk of lamb (mutton might be a better term, since borrego generally refers to meat from a sheep older than one year) that has been stewed with onions, a bit of tomato, some guindillas (hot peppers) and a lot of bay leaf, served with fried real potatoes. It was superb. Also vying for segundo choice were bonito a la riojana (tuna steak in a tomato-onion sauce) and lacón con patatas (more or less boiled ham and potatoes, but that does not begin to suggest its sublimity), always a great choice here.

When I asked for a chupito (a shot of postprandial digestif), this is what I was presented with: 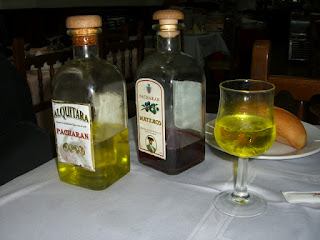 That’s the kind of place this is. And my flight to Berlin was ever so much more pleasant than it might otherwise have been.

Real bargains that are worth enjoying can be tricky to find in Madrid. For my money, this is one of the best.