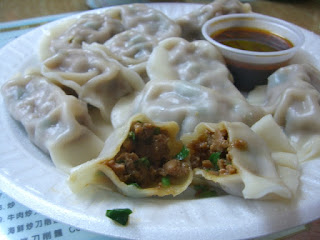 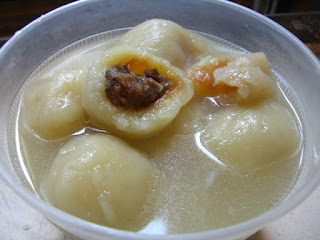 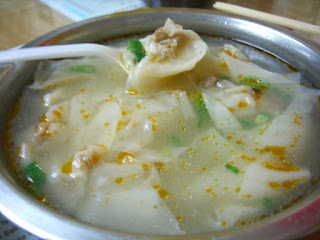 There's been a bit of buzz lately about a tiny noodle shop in Brooklyn's Chinatown that serves Yunnan-style fare--enough quality buzz that I was inspired to make the trek all the way down there this evening. It was worth it. Yun Nan Flavor Snack is wonderful.

Whatever you do, do not miss the dumplings in hot and sour sauce. "Sauce" is a bit of a misnomer--they (8 or 10 of them--I lost count), in fact, are served in broth. Spiced with at least three different peppers (red, black, and Sichuan) and sour with rice vinegar, it is at once strongly-flavored and subtle. All that is topped with some cilantro, and I could have sworn I tasted lemongrass in there somewhere, although I found no pieces of it in the bowl. Dumplings from the south of China really are different from their northern counterparts--these are made, I think, of shrimp and pork, enveloped in wrappers so delicate that they shrivel and wrinkle when cooked according to the contours of the filling (northern dumplings are far sturdier in construction!). A truly spectacular bowl of delights... for $4.25! In fact, I don't think anything here costs more than $4.50.

They do three kinds of noodle here, each available 5 or 6 different ways (with things like beef stew, spicy meat sauce, broth with crispy meat): rice noodle, wheat noodle, and rice stick, plus a couple of cold offerings. I opted for rice noodle with crispy meat. It was great--noodles in a broth (which they'll make spicy or not, according to your wishes) with a few slices of pork and lots of crispy unidentifiable pork bits. Well, not quite unidentifiable: I'm 99% sure there were several small, thin, round slices of pig bung in there (essentially, pig's anus). But don't you dare let that deter you--it's all part of the adventure.

The friendly proprietor, rightfully proud of his offerings, has already selected my order for the next time I'm there: cold rice noodle. I'm looking forward to it.

I've been finding great food in the most unprepossessing places lately. During a recent spin through the Flushing Mall food court, a busy stand near the center of things caught my eye: Ay Chung Steakhouse, adjacent to the Ay Chung Food stand which, by most accounts, serves pretty authentic simple Taiwanese fare.

Before that afternoon, I had no idea the genre "Taiwanese Steakhouse" even existed, but I'm now a believer! Almost everyone seems to order No. 1: the House Special Steak. It lives up to its moniker: a nice piece sirloin on a sizzling platter, smothered in a thick, peppery dark sauce with enough vinegar in it to keeps things really interesting, with a grilled whole scallion perched on top. No one asked me how I wanted my steak cooked; it emerged a perfect medium-rare. All grilled items seem to come with the same sides: a small salad, a cup of thick, light-colored soup, and some noodles that have been tossed with, of all things, corn kernels (those noodles go especially well with a bit of that sauce from the steak). If you don't feel like beef, they offer a wide variety of alternatives, including pork chop, lamb steak (I have to say I'm curious about that one), seafood, and even a vegetarian option. But that house special steak was so spectacular, I have feeling I won't ever find out how the other offerings are.