I had been reading about BZ Grill for a while and finally decided I needed to try it. Happily, the hype is correct - they do make the best gyros in town!

At least, the best I've tried... I have great difficulty imagining that there is better in NYC. No cylinders of processed mystery meat here - there is a rotating spit of layered sliced pork right up front, alongside its fraternal twin of sliced chicken. Although good, the chicken meats tends to get just a tad dry.  The pork gyro, on the other hand is fantastic... moist, perfectly seasoned, and just enough crunchy bits to keep the texture interesting. The sandwich is great (excellent tzatziki sauce): 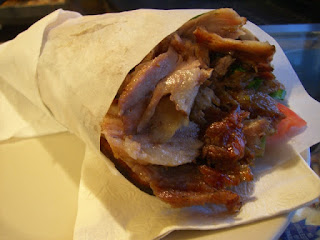 The platter - even better: 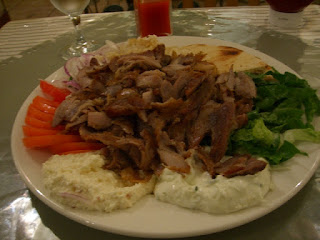 Plenty of meat, along with rice, some non-iceberg lettuce, chopped and scrupulously fresh, tomato slices, thinly-sliced red onion, a good dollop of tzatziki sauce and one of kopanisti (feta cheese spread), and toasted pita bread - well worth the 13 bucks they charge for it.

They have a good selection of souvlaki, kebabs, and other simple Greek specialties, but there are other places one can get most of those things, although quality here is assured to be good.  There is NO place else one can get gyro like this.  Open until 11 p.m. daily.

A note on Tertulia

The attentive reader of this blog may have noticed my borderline obsession with Asturias in northern Spain (okay, there’s probably nothing "borderline" about it). When I was there last year, there was already buzz about a restaurant in New York City that was going to serve real sidra, MONTHS before it was slated to open. Naturally, my curiosity was piqued.

When I began to read pieces about it, I got worried. For some reason, I delayed actually going there, most likely fearing disappointment. I finally did go this past weekend, and realized that my fears were well-founded.

I can say nothing of the food, since I didn’t have any. It's far too expensive for me under... well, pretty much any circumstances, and the menu holds no interest for me whatsoever (although I wouldn’t refuse a plate of jamón ibérico if offered one). I readily admit to being a peasant at heart – this "fusion" crap will forever be lost on me, I’m afraid. Give me traditional cooking any day.

Every puff publicity piece I’ve read about Tertulia cites its "roots in the cider bars of northern Spain". Except for the excessive number of knickknacks that pass for décor (which could just as easily be country Italian of French), it’s difficult to discern said roots, if they actually exist. The sidrerías of Asturias all have certain inherent qualities, none of which are apparent at Tertulia. They exist first and foremost for the enjoyment of sidra (more on that in a moment), accompanied by traditional fare, usually heavy on simply-prepared fresh seafood and, of course, cured pork products. Tertulia's menu, full of pretentious fantasies on lightly-Spanish themes, immediately strikes the wrong chord. A sidrería also demands a certain amount of space in which to be able to pour it properly (a bit more on that can be read here), which Tertulia lacks. Fine – I understand the space constraints and costs of Manhattan, but don’t then invoke sidrerías as your inspiration if you can’t even pour the sidra properly. And all sidrerías share a certain relaxed informality only very self-consciously played at here.

The reason for my visit – to try the sidra - unfortunately resulted in disappointment, too. Although they also offer offer sparkling sidra (which has been available in the U.S. for quite some time), my goal was the lightly fermented sidra natural being offered here, as far as I can tell, for the first time. Tertulia stocks a good marca, Trabanco, but you would never know it to taste it. Although sidra natural notoriously does not travel well, they also don’t store it at the proper temperature (too cold) and make only the barest, completely ineffectual attempt to pour it properly, thereby reducing one of the great libationary joys on earth to, at best, an oddity. Sidra is meant to be enjoyed freely, downing each culín in a big gulp, six culínes to a bottle – not nursing each precious, overpriced pour. Of course, that’s the only possibility when one is charged $32 (!!!) for a bottle that costs under 4 euros in any sidrería in Asturias.

Though the fellow behind the bar could not possibly have been more congenial, I felt dirty afterwards.

All the favorable qualities I wrote about in my previous post about Jiang Li (鴻意順 - hóng yì shun) I feel even more strongly about now. It has become my go-to restaurant when I've been in the mood for Dongbei food in recent months, and I've tried a few more dishes worth reporting on.

It has always been difficult for me to come here without ordering either the sliced braised pork with brown sauce (山東扣肉 - shān dōng kòu ròu) or the fresh hot pepper with dry bean curd (尖椒干豆腐 - jiān jiāo gān dòu fǔ), both written about previously. Usually I end up ordering both. Now another dish must be added to the list of addictions here: "chives pork with black bean sauce" (三鮮春餅 - sān xiān chūn bǐng). The Chinese name means literally "three fresh spring pancake", which, admittedly, doesn't seem to have much to do with its English translation. What you get is a plate of minced pork that has been sautéed with chives and black beans - the "three fresh (ingredients)" in question (sān xiān is often translated as "three treasure"). What goes unmentioned are the minced jalapeño peppers that are sautéed with it - this dish is not only rich and complex, but fairly seriously spicy! Alongside is a plate of the loveliest thin pancakes I've run across in a Chinese restaurant; fill them with the minced pork, a la "moo shu" dishes of strip-mall Chinese restaurant fame, and experience the desire to order a second plate after polishing off the first one.

The most delightful little snack lurks at the end the menu, which I never would have thought to order had I not seen some at a neighboring table - fried bun with chives and egg (韭菜盒子 - jiǔ cài hé zǐ). It's pretty much what the name says: a fried pastry-pocket filled with chives and scrambled egg, but more delicate than you're probably imagining, and utterly delicious. This post marks my debut as photographer here - I very recently acquired a camera that I'm still learning how to use, and unfortunately the pic of the pork, chives and black bean dish didn't turn out too well. This one is better: 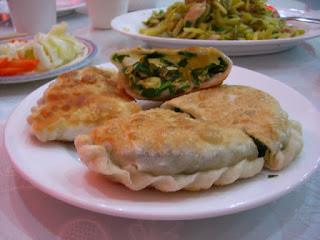 Since Miss Audrey Lo loves her pig intestine, one dish containing it must be ordered whenever she is along, and this week's was a winner - sour cabbage with intestines (酸菜炒大腸 - suān cài chǎo dà cháng). Coarsely-chopped sour cabbage is sautéed with slices of pig intestine and, of course, some garlic. A surprisingly comforting dish. 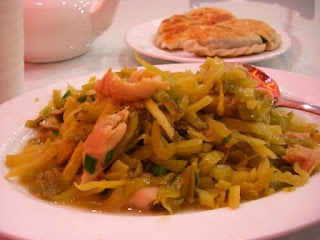 Also worth noting: they have listed on the wall (Chinese only) 拔 絲 (bá sī) dessert dishes, the chunks of caramelized fruit you dip in cold water before eating to make the sugar coating crunchy. If I can ever muster a bit of self-control when ordering the main dishes, I plan to try one some day. But I fear that day will not be soon.