Until the other night, easily the best xiǎo lóng bāo (小龍包 - "soup dumplings", although foodies tend to refer to them as XLB) I had tried in New York were those served by Diverse Dim Sum in the Flushing Mall. They're excellent, but those at Kung Fu Xiao Long Bao (功夫小龍包) are even better. Thin, translucent wrappers, meat and crab fillings of the proper texture, and tasty broth - all are as they should be. Perhaps enjoying them in a comfortable, tranquil restaurant environment - as opposed to a food court - gives them the edge, but I think they actually are slightly better. 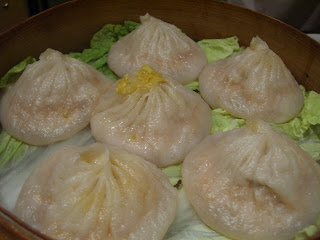 On offer here is a decent-sized menu with a lot of standard Shanghai dishes, and a large selection of breakfast, Shanghai dim sum, and noodle soups. In addition to xiǎo lóng bāo, most of the Chinese patrons had noodle soups on the table, and they looked excellent. We were not, however, in the mood for soup, so we got other stuff. The cold appetizer called "Shanghai Special Chicken" turned out the be the house version of wine-marinated (or "drunken") chicken (sān huáng jī - 三黃鷄), the nicest take on this dish I've ever tried. 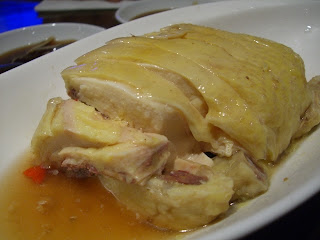 (The literal translation of the name of this dish is "three yellow chicken", and it appears that "three yellow" can refer to, among other things, a particular breed of chicken.)

Shredded Beef with Chili Pepper (xiǎo jiāo niú ròu sī - 小椒牛肉絲) is another very good dish: beef shreds stir-fried with shredded spicy green peppers and onion. Clean, fresh flavors, nicely balanced. I have friends that liked to order this dish at New Green Bo (now called Nice Green Bo, an especially ironic name considering the disposition of most of the staff) in Manhattan's Chinatown, way back when that was an acceptable place to go for people who like food (this was a long time ago)... Kung Fu Xiao Long Bao's is on another, higher plane entirely. 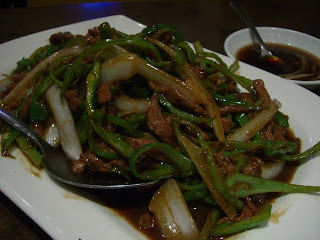 For me, the real revelation here is the Braised DongPo Pork (rě wèi dōng pō ròu - 惹味東坡肉). The expression rě wèi means "rich" (with thanks to Audrey Lo - I would never have figured that one out on my own) - a seemingly unnecessary modifier, since DongPo Pork (pork belly slow-braised in wine, soy sauce, and sugar) is itself a pretty rich dish to begin with. It comes in what looks like a large coffee cup or tiny soup tureen, fragrant with star anise and cassia (and looking almost like chocolate pudding, or raw liver): 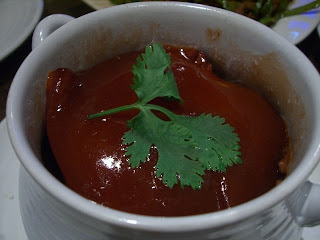 As it turns out the 惹味 is not, in fact, descriptive overkill - this really is the richest, most flavorful version of this dish I have ever tried. It's pretty extraordinary. (The picture of a slice of it on rice did not turn out well at all, but perhaps it gives you an idea.) 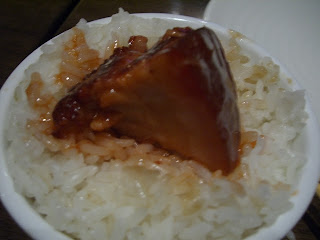