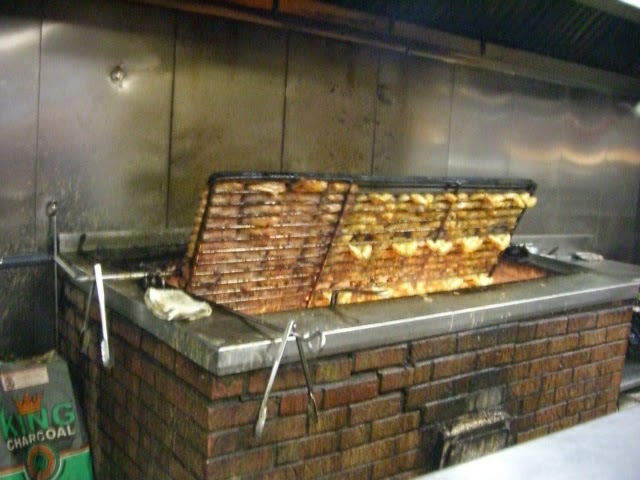 I almost didn't write about this place because, as I was taking the above picture, an irritating twat behind the counter said petulantly, "No photos allowed."

Surmising that the impromptu policy was not so much about culinary secrets as it was about the immigration status of most of the employees, I asked:

"Not even just the food?"

If the dictum "request" had been delivered with even the least iota of courtesy, I would have considered complying. But screw it. Businesses should really try to keep the cunts away from the public.

Sullen twats notwithstanding, Ferry Street Barbecue hawks some mighty tasty grilled chickens. Nicely seasoned, with the right amount of char, and (usually) juicy, a whole bird will set you back 11 bucks - 12 if you want rice or french fries with it. 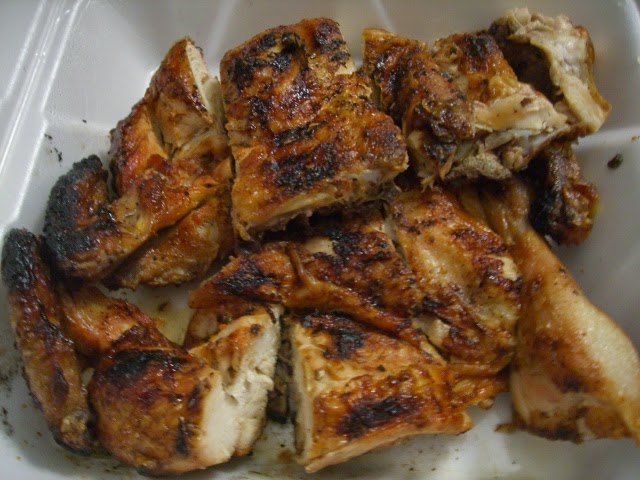 As is probably obvious from the photo, this place is a barbecue in the sense of "meat grilled over charcoal", not "smokehouse barbecue". It's a very informal place - a counter and 6 or 7 tables - and almost everyone is there for the chicken, but they also do pork ribs, beef ribs, shrimp, and bacalhau.

I was picking up some Portuguese groceries in Newark this afternoon - one should never, ever run out of Delta coffee beans - and decided to stroll over to Portugalia Bar & Restaurant, a favorite of my good friend Michael's. This was not the first time I had reconnoitered the joint, but the pratos do dia (daily specials) had never been inspiring enough to get me to stop in... until this evening. There on the list was cabidela de galinha, probably my favorite Portuguese dish of all time. 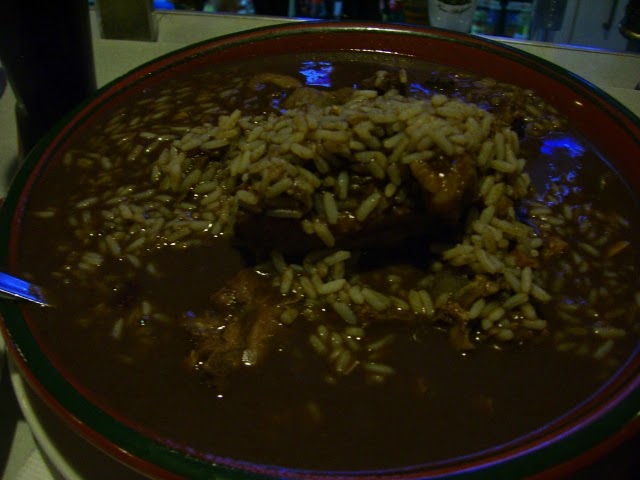 Now, it may not look like much (and the lighting there did not help things one bit - my apologies for the dimness of the photo), but it is utter deliciousness. Chicken is stewed with its giblets, removed from the pot, and rice is then cooked in the same liquid. "What's that brown color, then?" you may ask. The dish is finished with chicken blood. When the chicken is killed, the blood is saved, with some vinegar mixed in to prevent coagulation. For my taste, there was just a bit too much of that vinegar in Portugalia's cabidela, but overall a good rendition of the dish.

Most of the patrons were eating either this, or the grilled chicken, which looked excellent (even better than Ferry St. Barbecue's). And the accompanying fried potatoes are the first and only I've seen in the U.S. that look exactly like they do in Portugal. I do believe that's what I'll be sampling my next trip here.

The first time I wandered into Tikka Grill, I immediately spied a fresh chicken tikka kebab on the bottom shelf of the glass case, dripping with yogurt and spices, and I knew I had to have it. It was so delicious, I have been unable to make myself try much of anything else here. It's only serious rival I've found in the NY metro area is at the Fiza Diner. 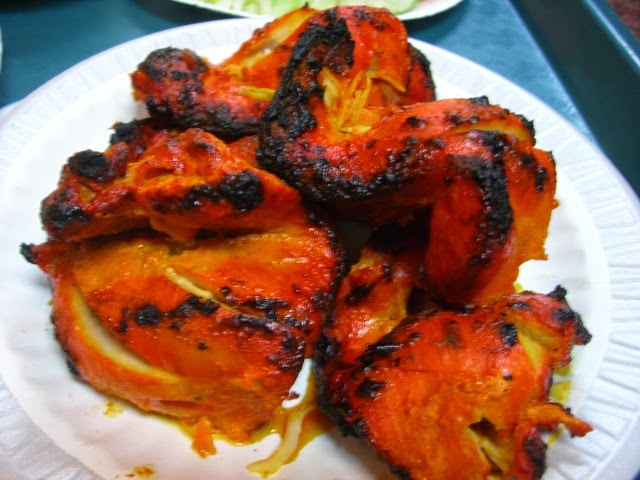 I can tell you, though, that the onion kulcha is excellent: a layer of tender onions enclosed in light, moist, and crispy bread. 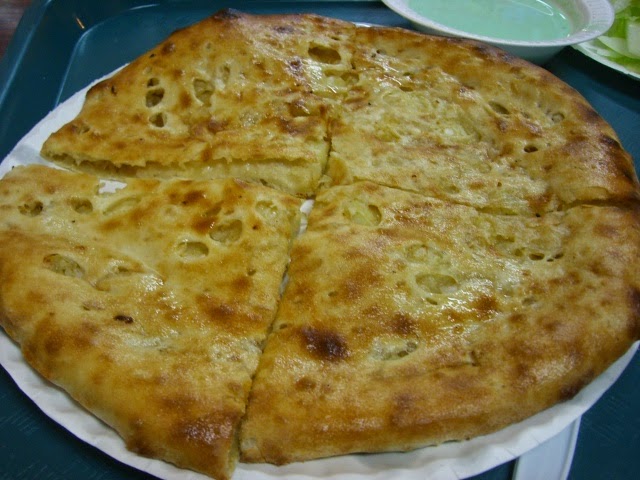 On a busy corner of Astoria Blvd. near LaGuardia airport, this place is, in fact, rather easy to miss. Tucked in the ground floor of an unprepossessing low-rise building, it's almost literally a hole-in-the wall. If you go, you'll be rubbing elbows with a bunch of New York's Pakistani taxi and livery drivers, who are almost always eating curries, not kebabs. I'm sure they're great, too (the taxi drivers always know where to eat) - I just haven't got around to trying them yet.

Upstairs at the New World Mall

On the main floor of the New World Mall, near the Jmart cashiers, is a counter I passed many times before deciding to investigate. It generally has a motley assortment of what look like savory pastries, cold "salad" items, and stewed meat items for takeaway, and the other day, some lovely-looking pork shanks caught my eye. How could I resist? 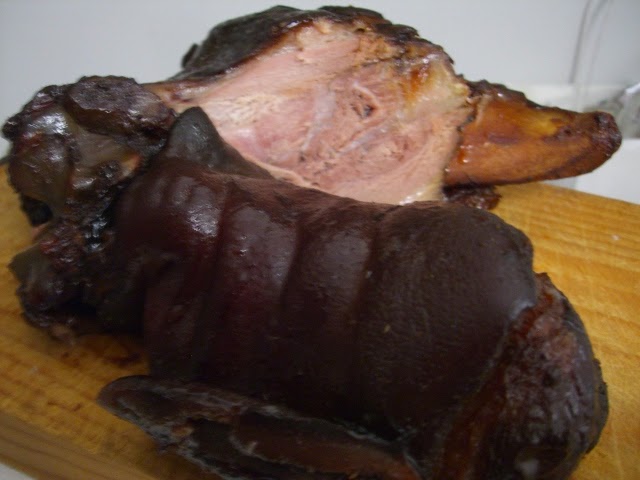 They call this jiang zhǒu zǐ (酱肘子), pork shank stewed in a soy, sugar, and star anise sauce, and it is DELICIOUS. Well worth the 8 or 9 bucks it will set you back.

It's the perfect edible souvenir after a meal at Tian Fu or Li's Noodles downstairs.

Things are always changing in Flushing. Many of these changes are unwelcome ones, like the demise of Maple Snacks, the disappearance of Szechuan Dish, and the recent mediocre meal at Lao Dong Bei, ascribable to a different chef (one hopes this change is not a permanent one). But lately, I noticed that Cheng Du Heaven (成都天府 - chéng dū tiān fǔ), in the basement of the Golden Shopping Mall, has been, little by little, expanding its offerings – and seating area – while keeping quality high and prices low. And that it was high time it got its own blog entry here.

I remember the days when their menu was a single column of dishes listed on the wall by the counter. Now the menu boasts more than 50 dishes, with an additional 15 or 20 meal-sized soups, of both the má là tāng (麻辣湯 – the typical Sichuan spicy/tingly stews) and noodle soup varieties. 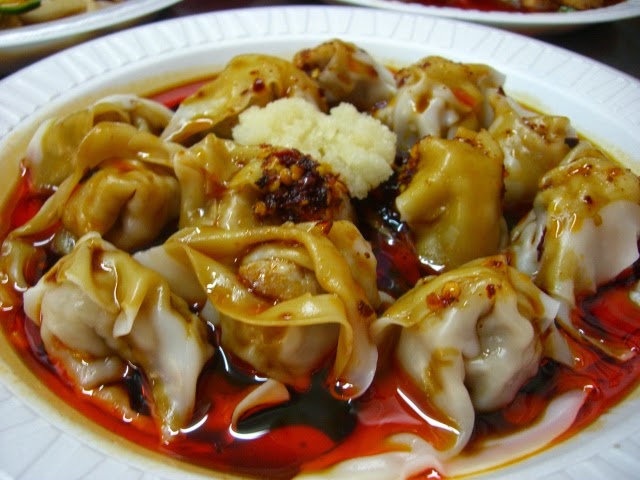 While their Dan Dan Noodle (擔擔 面 – dàn dàn miàn) does not erase nostalgia for Sister Zhu's, it is one of the very best around. Another well-balanced spicy sauce lurks below those tender noodles. And the dusting of crispy-yet-tender minced pork is the perfect complement. 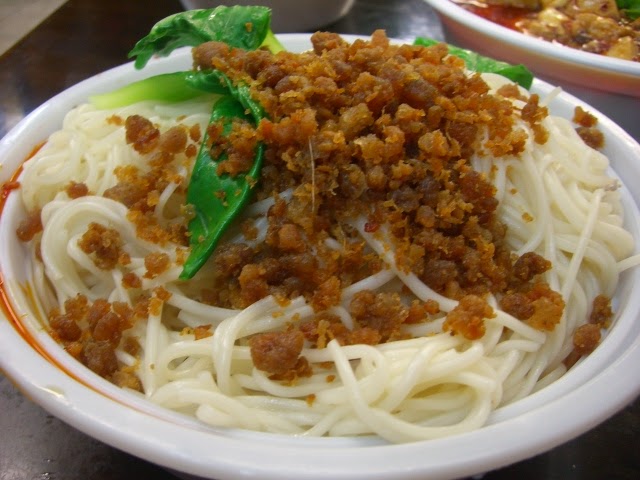 Their version of Ma La Beef Tendon (麻辣牛筋 – má là niú jīn) is as good as any around Flushing, too.

The Ma Po Tofu (麻婆豆腐 – má pó dòu fǔ) here is the best I've tasted in years. The tofu is soft, but not too soft, and the sauce is the perfect balance of spicy and salty, with just the right pungent accent from fermented black beans. 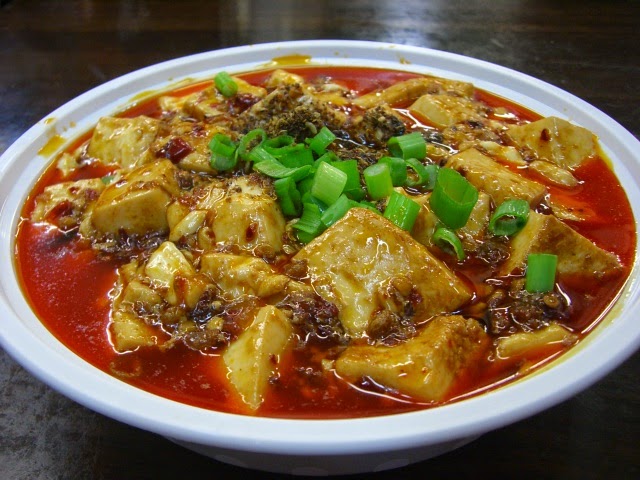 The only near-miss so far has been "Chicken with Family Sauce" (mmm... family sauce… my favorite!). A better translation of 家常熱窩鶏 (jiā cháng rè wō jī) would be “chicken home style”, and it was nice, but not all that interesting. Small bone-in chunks of chicken are lightly simmered in a mildly spicy sauce with two or three kinds of peppers and scallion. 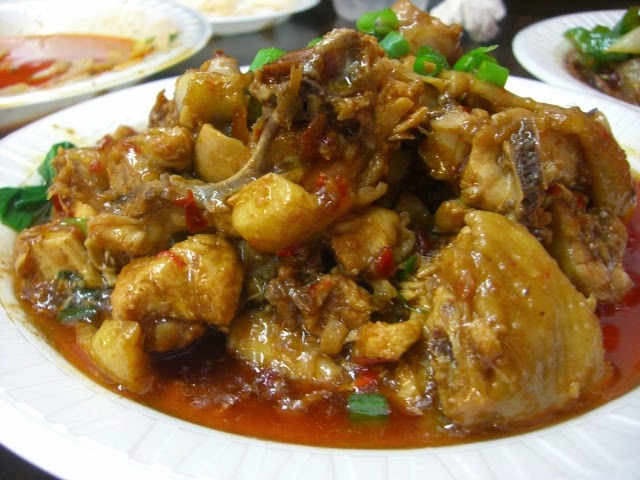 Interestingly, the leftover portion when heated up at home the next day was better than on the first day. The flavors were both better melded together and more pronounced. My friend Audrey tells me that the characters 熱窩 mean, essentially, "warm, but not too hot", making the preparation true to its name. I would just prefer the dish to have finished cooking, I suppose!

On the other hand, their dry-sautéed chicken (干煸鶏 - gān biān jī) is the tastiest version of this dish I have ever tasted, with lots of intense spicy and salty flavor. It's listed on the wall, rather amusingly, as "chicken with dire chillis".

Their Spicy Twice Cooked Pork (回锅肉 – huí guō ròu) is stellar – as good as any I've tried, with a real homemade quality to it. 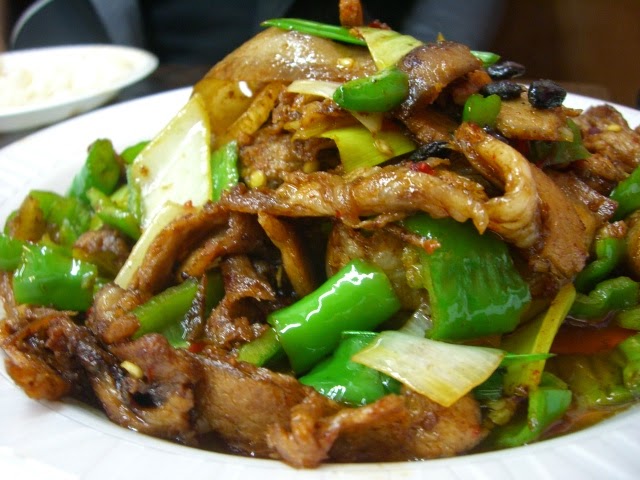 Don't miss the array of appetizer dishes and snacks in the glass counter-case. The Ma La chicken wings are marvelous to keep around the house to snack on. And their Ma La Sausage (麻辣香 腸 – má là xiāng cháng) really is almost as good as Sister Zhu's from Maple Snacks: 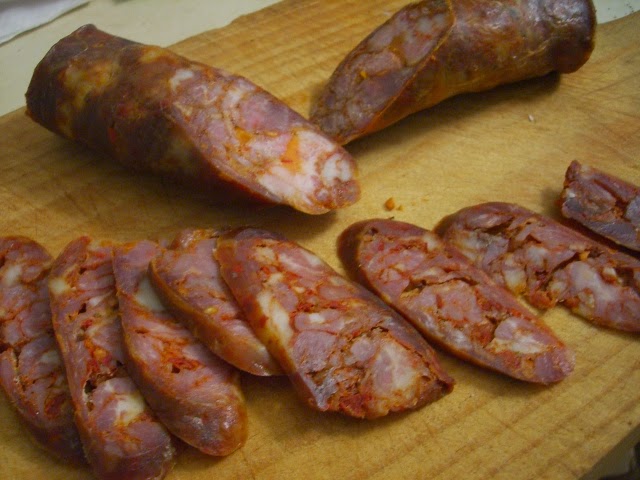 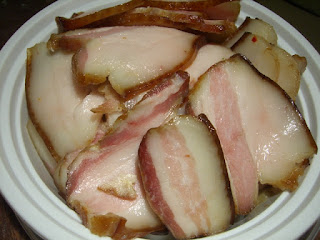 Cheng Du Heaven serves, for my money, the best Sichuan food in Flushing at the moment (Little Pepper is in College Point). Because of the very spartan dining environs, one might wish that some of the dishes were a buck or two cheaper, but it's still a great value. 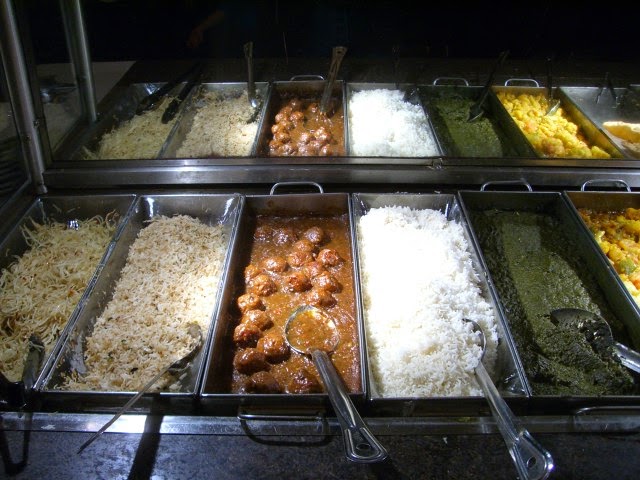 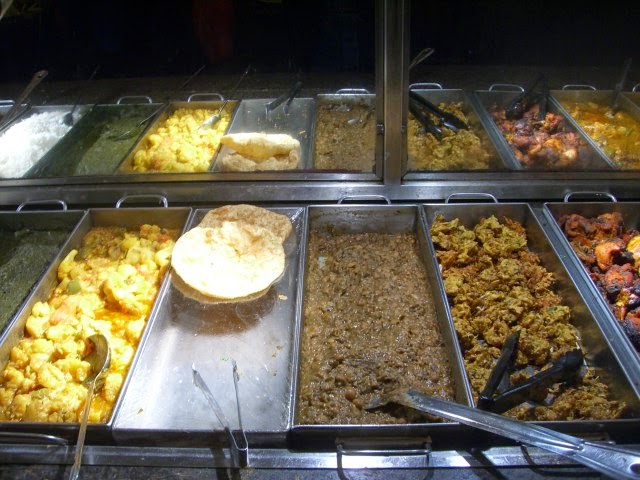 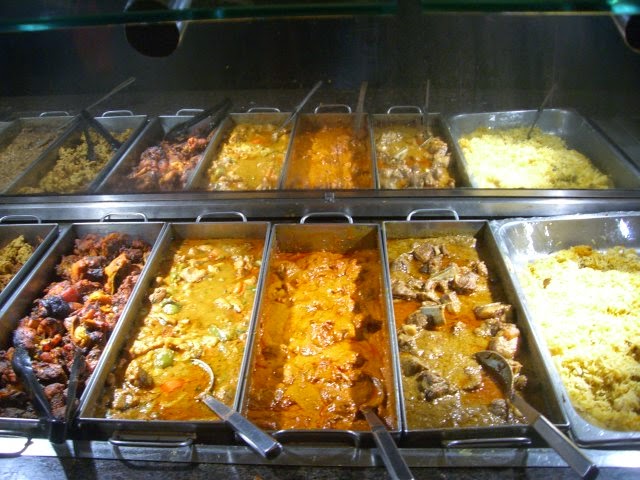