One of the things that makes the tapas scene in Spain so great is that each tapas bar has one or two specialties and, even though they may do other stuff, the house specialty is why you go to a particular bar. Since, in the larger cities, tapas bars tend to be in one part of town—sometimes even on one street—a good tapas crawl means wandering from bar to bar and eating something different and extraordinary in each place. Oddly enough, a little piece of that tradition is to be found in Syracuse, at Clark’s Ale House. They do pretty much one thing, food-wise, and they do it extraordinarily well.

Admittedly, one of the chief attractions of Clark’s initially was that it is across the street from my hotel, and in this snowy weather I was not in the mood to wander very far. I had also read they make a good roast beef sandwich. Fine, I thought—I could go for that. Good thing, as there’s very little else on the menu: barley soup, some cheeses to nibble on, and… that’s about it. Oh, and pickled eggs. I ordered a sandwich, the guy behind the bar turned around and made it, and... it was perfect. Tender, uniformly pink medium-rare roast beef sliced right there and then, doused in a bit of jus, and served on an onion roll. I can’t remember EVER having a better roast beef sandwich. And at six bucks a pop, the decision to order a second one was an easy one.

Clark’s also happens to be an extraordinarily good place to drink beer: 20 well-chosen varieties on tap, complete with information on serving temperature! Now in New York City, this usually means there’s still nothing I want to drink (okay, I’m picky). I happen to think that Munich lagers are the pinnacle of the brewer’s art, but trying to find one on tap in NYC is an exercise in futility. Oh, there’s usually something from Munich behind the bar, but it’s almost always a hefeweizen (which I prefer from a bottle, but that’s another topic) or a starkbier. (Any German beer name that ends in –tor is a starkbier. Is there something inherently yuppie about starkbiers?? I don’t get it.) But never a Munich lager. Clark’s had Spaten lager on tap. I was in heaven.

Strolling around Syracuse, NY, this afternoon I was surprised--to put it mildly--to stumble upon a restaurant purporting to serve Lao and Thai cuisine. Having never tried Lao food before, I knew that this evening's dinner was coming from Lao Village.

The menu, however, seemed to be just a bunch of quite recognizable Thai dishes. I asked the guy behind the counter (from Laos, as it turns out, and I'm pretty sure it was his father in the back doing the cooking) what is really, typically Lao on the menu. The response: "Lao and Thai... pretty much the same." A little internet research suggests this is almost certainly not the case. Still, after ordering the only thing on the menu that even mentions the word "Laotian" in the description, I can tell you their food is quite tasty, if of dubious "authenticity". A soup they call "keang jeut" was broth with ground chicken and a LOT of vegetables (good nonetheless). Approaching stellar status is the noodle dish called "khanoom jean"--rice vermicelli with chunks of chicken, shredded cabbage, bean sprouts, mint, kaffir lime leaves, scallion, cilantro, and "Laotian coconut curry paste". I'll take their word on that one... I do know I've never had any curry in a Thai restaurant that tasted anything like it. It was a bit like pad thai, except really delicious.

Definitely worth stopping by if you're in the neighborhood. 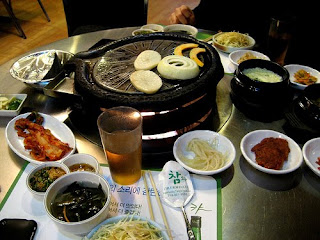 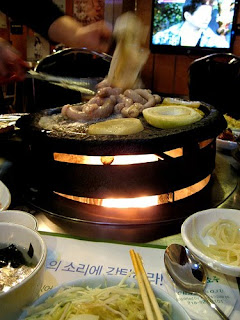 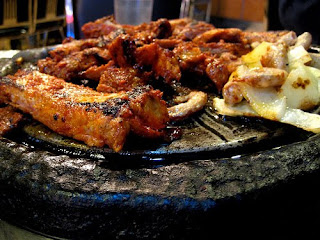 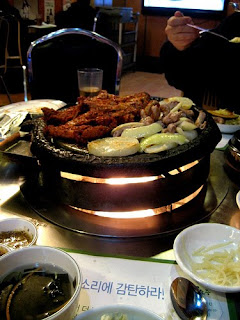 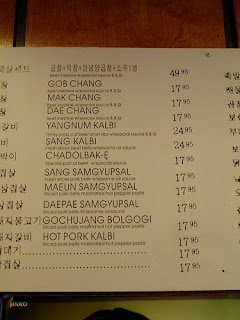 Tucked away in a relatively quiet block of Flushing's Union St. is the Korean-Chinese restaurant Mani 1. I stopped in to pick up a take-out menu for future reference (oddly, there is no Korean on the take-out menu that transliterates as "Mani"--just, roughly, chwee ryong mong), and the waiter let me know that they have an eat-in special of jja jang myun for $2.99. How can one go wrong for just $2.99? I stayed and tried it.

It turns out you can't (go wrong, that is). While the noodles are nothing special (standard dry noodles boiled up), the sauce is an especially comforting, home-y version of a food that I find to be serious comfort food to begin with: lots of almost-carmelized onions, enough meat to keep it interesting, and a nice, mellow flavor. And at $2.99, a steal!

There appear to be some things lurking on the menu that aren't just run-of-the-mill Korean-Chinese fare that warrant future exploration. And, of course, fried mandu.

Finally managed a return trip to Northeast Taste Chinese Food this evening with adventurous-eater friends--of whom I don't get to see nearly enough--Michael (Pan of the Chowhound and eGullet boards) and Maggie. And another satisfying meal was had by all.

Big hits of the evening were a lovely fish stew with an extremely diverse bunch of vegetables (several root vegetables, a couple of types of mushroom, tofu, tomato) and lamb stir-fried with hot pepper and cumin, both from the supplemental picture-menu. I'm beginning to think one simply can't go wrong stir-frying lamb with hot pepper and cumin: every one of these northeast Chinese restaurants around Flushing has its own version, each one unique, and each one successful. More dumplings--this time, pork and chive. Not quite as spectacular as the pork and sour cabbage ones, but excellent nonetheless. And this time, we were determined not to indulge in the usual over-ordering and save room for dessert. It was worth the effort: "sliced fried egg pancake" is the only Chinese dessert I have ever eaten with unalloyed enjoyment (disclaimer: I'm not much of a dessert person, ESPECIALLY when it comes to Asian desserts). One hardly knew what to expect from its name, but what appeared was a platter of what resembled bits of eggy funnel cake, which had been coated in a sugar concoction (just like the apple/taro/sweet potato dessert at Fu Run) and fried. (Pictures courtesy of Jose--who else?) 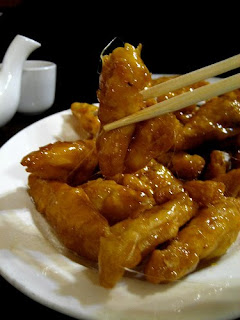 And just like that dessert, one dips the pieces in cold water just before eating to harden the sugar coating. Deliciously addictive. 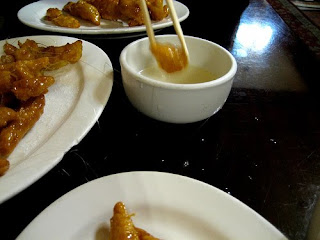