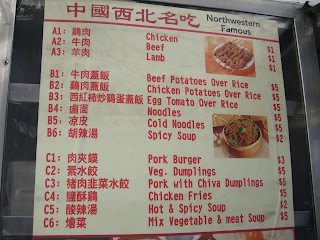 My neighborhood, Morningside Heights/Columbia University, like the Upper West Side in general, is a notorious wasteland when it comes to actual good food. Yes, there's Bombay Frankie, and an uptown outpost of Legend (though not blog-worthy, quite decent) recently opened on W. 109th St. But the scene recently brightened considerably with the arrival of Northwestern Famous (中國西北名吃), a.k.a. Uncle Luoyang (洛阳大叔) food cart by the main entrance of Columbia on Broadway. 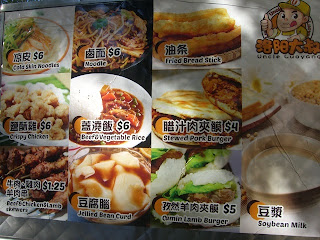 中國西北名吃 (zhōng guó xī běi míng chī) means "China Northwest Famous Food", earning it a place on a very short list of establishments where the English name is an accurate translation of the Chinese one. My curiosity was definitely piqued wondering what, exactly, "Northwestern" refers to. The answer appears to be Shaanxi province (there's a lot of China further north and much further west than that, but I'm still getting acquainted with these subtleties of terminology). The signature offering is là zhī ròu jiā mó (腊汁肉夾饃), or "Stewed Pork Burger", a specialty from Xi'an. This is a first cousin to the cumin "lamb burger" sold at Xi'an Famous Foods (although pictured on the side panel of the cart, it's not actually on offer here at this time). The spices are milder, but the pork version is just as satisfying as the cumin lamb: juicy bits of long-simmered, ultra-flavorful meat in a round, wheat flatbread. (There is a highly informative article on traditional là zhī ròu jiā mó here.) A hearty snack for the princely sum of 3 dollars (the list menu in red letters seems to be the real menu here). 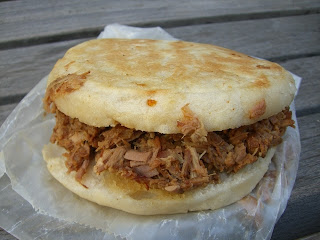 And now a woman from Henan has set up a cart next to Northwestern Famous, which I plan to check out soon. It's odd - I am utterly unaccustomed to actually wanting to eat in my neighborhood! Thank heaven some people with an entrepreneurial streak have finally figured out that there a LOT of Chinese students at Columbia that might like a taste of home. Here's hoping the trend continues.

The new cart has good grilled lamb skewers. Saves me from trekking to Flushing for a fix. Their cold noodle dish is OK in a pinch, as well.

Eric, Do you think this cart is related to a similar one that parks near NYU -- also manned by folks from Luoyang and serving a mix of Henan and northwestern Chinese fare: http://newyorkstreetfood.com/42347/nysf-guest-post-traditional-chinese-food-by-anne-s-of-city-spoonful/#more-42347??

Tough call, Anne. At first blush, the two carts do not appear to be related - different graphics and presentation, although they do share quite a few menu items, and the noodles (with green beans!) in NYSF's picture look very much like the noodles at my cart (but mine doesn't offer Zhajiang mian--damn!). And the first four characters in the name of your cart (meaning Northwest China) are the same. In my cart's case, Luoyang APPEARS to be just a name and not an indication of provenance, but...? I asked two Chinese girls in line with me today where the food was from, and the swift, unequivocal answer was Xi'an. I must say your cart looks rather more upscale than mine! Those noodles with green beans argue for related, though.

The guys at my cart told me (through a Chinese student in line with me, who graciously served as translator) that they have another cart near Columbia. The food at the NYU cart is also mostly Xian food, but the egg + tomato dish (served over rice or noodles) seems very Henan-style, no? The Luoyang + Xian combinations at these both carts also seems to unique to be mere chance, right?