Korean-Chinese restaurants – that is, restaurants serving cuisine of the Chinese immigrants in Korea – such as Hyo Dong Gak have been around New York for decades. I remember eating at one on Manhattan’s W. 32nd St. in the early ‘80’s… I wish I could remember the name of it (their jja jang myun was particularly hearty and comforting, with chunks of potato in addition to the usual ingredients - still perhaps my favorite version ever). But the Chinese-Korean restaurant (by which I mean food of Koreans living in China) is a relatively new phenomenon in New York. They started popping up in Flushing just a year or two ago, and now there are perhaps 5 or 6 of them, plus the stalls in the New World Mall food court. Two of them face each other on 41st Ave.: RiFu has been around a while, and Feng Mao (丰茂飯店 - fēng mào fàn diàn, or, roughly, "luxuriant abundance" restaurant) opened very recently in the space that used to be the late, lamented A Fan Ti. (There is a third just a door or two west of RiFu.)

Yanbian, the Korean autonomous prefecture in Jilin province of northeastern China, is the epicenter of this style of cooking. And it seems that there must be some sort of traditional association in that area with the phrase "fēng mào" (丰茂), as a Chowhound post reveals there is a restaurant in Los Angeles of the same name with proprietors from - you guessed it - Jilin province. It makes perfect sense that there are a lot of Koreans there – it shares a border with North Korea – and their cuisine has obvious characteristics of both countries. With Koreans, you always get banchan, those small dishes that precede and accompany the meal. Last night at Feng Mao, we were given four: salted roasted peanuts, a not-particularly-spicy kimchi of daikon radish shreds and red pepper, thin strips of seaweed with a bit of vinegar and red pepper, and a particularly nice combination of bamboo shoot and jalapeño pepper in a slightly sweet, vinegary sauce. (Photos courtesy of Pete Cuce) 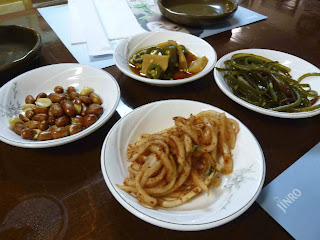 We ordered entirely too much food for four people – six dishes in all (a seventh appeared halfway through the meal, compliments of the house) – and there was hardly an unsuccessful one among them, although the “cold noodles” (冷面 – lěng miàn, which turned out to be naeng myun, or buckwheat noodles in a cold spicy broth) were rather mushy. 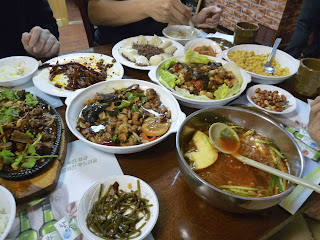 “Lao gan ma spicy spare ribs” was a winner. Its name in Chinese is rather long –老干妈铁板香辣小排骨 (lǎo gān mā tiě bǎn xiāng là xiǎo pái gǔ) – and presents a bit of a puzzle for the non-native. Tiě bǎn means “iron plate”, and sure enough, it arrives sizzling on an iron plate. Xiǎo pái gǔ means “small spare ribs”, and small they are, hacked into bite-sized pieces. Là is “spicy”, xiāng, savory or fragrant... so far, so good. But lǎo gān mā? I’ve seen this translated as “old grandma” (although gān means “dry”, implying a shade of meaning I think I’d prefer not to contemplate for too long)... whose dried-up old grandma are these spare ribs named after, anyway? Then I read that Lao Gan Ma is a famous brand of chili paste in China – I’m guessing it’s one of the ingredients. At any rate, the dish is quite tasty, although working around the bone shards can get on ones nerves. (Ed. I've since learned, through the magic of Twitter, that gān mā refers to a sort of adoptive mother figure, rather like a godmother.) 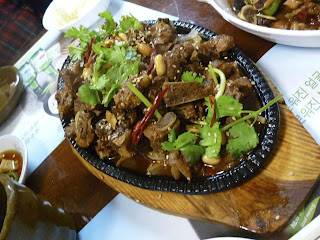 Probably my favorite dish on the table goes by the unassuming name of “sautéed chicken” on the menu, although its Chinese name, nóng fū chǎo jī (农夫炒鸡), means farmer, or peasant, sautéed chicken, making it sound instantly much more like my kind of dish. What arrived was something of a cross between a stew and a stir-fry of small hacked-up pieces of chicken (with bone, so once again, watch out for shards), black mushrooms, green and red bell peppers, and large rounds of potato in a light brown sauce. Delicious, and at 12 bucks, it was the best deal on the table. 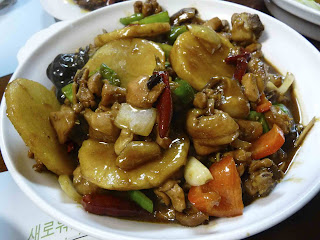 The most unusual thing we got was “fried popcorn in egg yolk sauce”(蛋黃玉米粒 – dàn huáng yù mǐ lì). Not quite correctly translated, since the “popcorn” turned out to be just “corn”, but it was still unusual: kernels of corn coated in egg yolk and stir-fried until dry and separate. But not too dry – the corn kernels still retained just enough of their juiciness, and the overall effect was oddly lovely. Definitely worth a try. 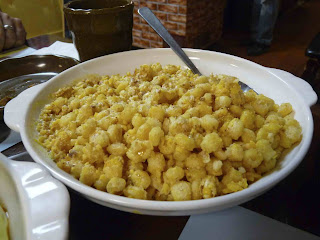 The rest of the dishes kept reminding me of others in the area. Their cumin beef (孜然牛肉 – zī rán niú ròu) is quite similar to M & T’s “Qingdao spicy meat”, with a spice combination veering a bit toward that of Fu Run’s muslim lamb chops. Very nice, but at 5 bucks cheaper, I think I’ll head to M & T when I get the craving, even if theirs is pork, not beef. (Click on the photo - the small version below does not do it justice.) 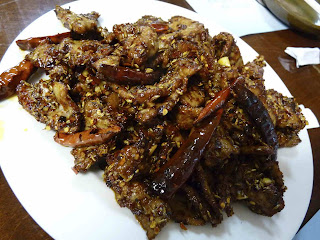 And the “dried tofu with seafood” (八珍豆腐 – bā zhēn dòu fǔ) turned out to be “eight treasure tofu”, just like at Yi Lan (they mean “fried” instead of “dried here). Cubes of fried tofu are covered in a brown sauce with chunks of squid, fish, shrimp, chicken, dried scallops, sea cucmber, and other goodies. Good, but Yi Lan’s is six bucks cheaper for a version that is every bit as good, or better. 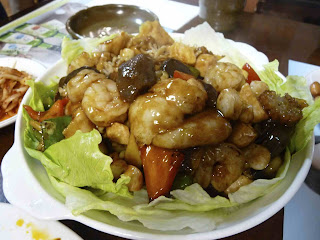 The (complimentary on this occasion) rice cakes (打糕 – dá gāo) are just like RiFu’s across the street – dense, gooey chunks served with ground red beans for dipping. The slight sweetness of the red bean makes this dish very dessert-like. 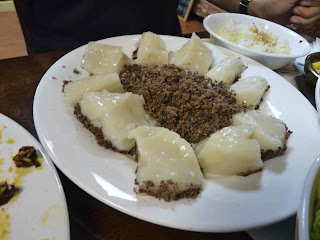 As you’ve no doubt gathered by now, I do find this place rather expensive, especially when you consider what is available nearby. Prices are almost identical at RiFu for food of similar quality, although RiFu’s portions are ENORMOUS (and RiFu has the wonderful “slate tofu” – thick slices of palpably house-made tofu served on a hot stone plate, each with its own dollop of red pepper paste and some minced scallion). But it's a cuisine worth investigating, and if you'd like more information, head over to Joe DiStefano's World's Fare blog and read his piece on Minzhongle.