It seems almost inconceivable to me that anyone interested in the kind of food I'm interested in doesn't already know about Sammy's Halal Food Cart, but for those one or two of you out there, you need this information. You see halal carts that offer grilled chicken and/or lamb over rice (or pita sandwiches) all over the city. This one is absolutely the best I've found, and is the standard by which I measure all other halal carts I try. A few come close, but none are better - there is a reason they won the 2006 Vendy Award.

You'd think this fare would be reasonably simple to prepare, but the number of possible pitfalls is somewhat suprising, all of which Sammy's avoids seemingly effortlessly. The chicken is always juicy, tender and flavorful, and nice-sized chunks that aren't so small that you wonder what, exactly, you're eating. Okay, the lamb is still ground, seasoned, and compressed before grilling (like everywhere else), but it seems to be a notch or two closer, somehow, to the original meat - and therefore, tastier - than all the others. Their rice is never dry or lumpy (surprisingly, I've had some truly lousy rice from halal carts) and the sauces are very good. They have just about the best hot sauce in halal-cart-land, and if you like spicy cilantro sauce, it's there - you just have to know to ask for it. 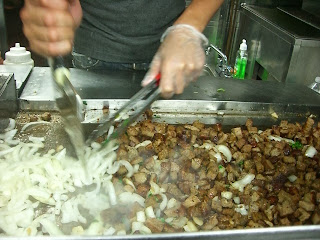 They're just a few steps from the 74th-Roosevelt-Jackson Heights transportation nexus, and they're open until 3 a.m. At 5 or 6 bucks, I can think of no more satisfying bargain in the late-night (or any-time) snack department.