Goddammit! I had been hearing (and reading) for years that Peter Pan Donuts made the best doughnuts in NYC, but since they are located in fucking Greenpoint, I refused to consider the possibility. A few nights ago, my friend Elizabeth mentioned doughnuts, and I realized I had not had a decent doughnut in, literally, years - which includes those hipster creations/abominations they sell at the Doughnut Plant (and don't get me started about cinnamon rolls - New York is an abysmal town for cinnamon rolls) - so. predictably, I developed a craving. Then it happened that I was within striking distance of Greenpoint today, and I decided to swing by.

It was, admittedly, late in the day, and most items were sold out, including my usual litmus test for a doughnut joint, the classic glazed yeast doughnut. But there were a few marble (cake) crullers left, and I espied a sour cream doughnut or two - enough for a preliminary sampling. 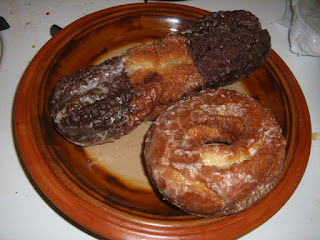 I feel confident the glazed doughnuts are every bit as wonderful... dammit. Why does Peter Pan have to been in fucking inaccessible Greenpoint??