Do you remember Dutch Pantry? It was a chain of roadside restaurants that used to dot highways in Pennsylvania, Ohio, Florida, and other locales. They served Pennsylvania Dutch-inspired family fare, sold kitschy Pennsylvania Dutch-themed souvenirs, and were built to evoke Pennsylvania Dutch barns - complete with hex signs! The chain collapsed in the late '80's (there's a fascinating nostalgia website devoted to Dutch Pantry here), but somehow a couple of Dutch Pantries managed to survive and continue to operate in Pennsylvania. I've eaten at the Clearfield one a couple of times on road trips in the past year. The former glory has faded a bit, but it's still one of the best roadside options you'll find on Pennsylvania's I-80.

That is, unless you're passing by Danville. If you are, a meal at Mom's Dutch Kitchen is obligatory. It is the real home-cooking counterpart of Dutch Pantry. AND you can get scrapple here (for you scrapple fans), which was never possible at Dutch Pantry. 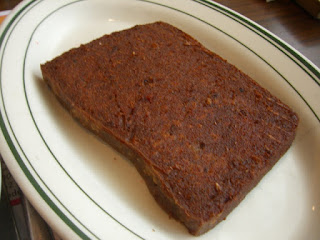 No Pennsylvania farm breakfast would be complete without a nice slab of scrapple (and a bowl of sausage gravy): 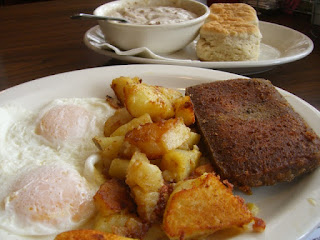 The menu is large and varied, but for the real experience, stick to the homey items, like meatloaf, which is fantastic. It's accompanied by stuffing and real mashed potatoes, and yet another side dish of your choice. In the Dutch Pantry tradition, I got spiced apples - freshly made, and delicious. Soups are also great... their white bean with ham is stellar, and I got a bowl of chicken noodle soup that was more like a dish of grandma's chicken and noodles, moistened with a little broth. Delightful.

None of those photos turned out to be usable, unfortunately. I had better luck the evening I ordered country-fried steak. That's not something I would normally think of ordering outside of Texas (where it is, of course, called "chicken fried steak"), but when I read that they top it with sausage cream gravy here... well, how could I resist? I'm glad I didn't. (How do you make real mashed potatoes even better? Top them with sausage gravy, too!) 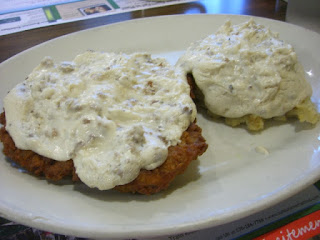 Dutch Pantry was famous for its apple fritters. When I spotted them on the menu at Mom's, I had to see how the compared. There is, in fact, no comparison whatsoever: Mom's Dutch Kitchen makes the greatest apple fritters I have ever had. Just light enough to be fluffy on the inside, and just crisp enough on the outside for the perfect texture contrast. Sprinkled with powdered sugar, they are one of the world's few perfect desserts as far as I'm concerned. 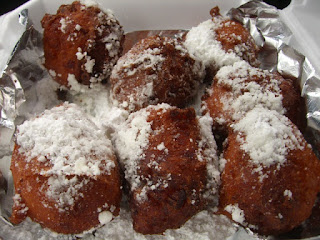 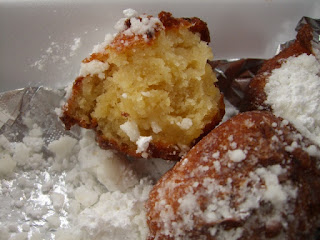 If that doesn't tempt you, they also have a great selection of Amish pies. If you've never tried shoo-fly pie, this just might be the place to do it. I did, and it's great.