During a post- Chao Thai stroll in Elmhurst one evening, we happened to pass New Broadway Seafood Restaurant. My friend Elizabeth--who, at one time, lived halfway around the world--immediately recognized it as a Hong Kong style restaurant, which aren't so very common in NYC). We popped in to make a few inquiries, and, sure enough, she was right. Unfortunately, one of the queries elicited incorrect information as to how late they serve dim sum, resulting in an aborted dim sum mission the next day. It was quite a while before I got over my irritation sufficiently to try again, but I'm glad I did: New Broadway, while not quite on the level of the best places in Flushing, serves better dim sum than any place I've found in Manhattan. And the trip from Manhattan is a good 20 minutes shorter than the trip to Flushing.

The restaurant is spacious, but not huge, and there's a nice, bustling bunch of Chinese locals during lunchtime. (Curiously, on both occasions, I was one of two non-Asian diners in the place.) It seems to me that their steady stream of patrons--without the carnival-like atmosphere of some of the larger dim sum houses--makes it possible to regulate more effectively how the items come out of the kitchen. Nothing tasted like it had been sitting around too long, and the all of the fried and baked items were still warm.

They have most all of the standard offerings, and I got to try all of my favorites. And all of them were just a little bit different than what I was used to, presumably because this is a Hong Kong and not a straight-up Cantonese restaurant. It seems that meat is emphasized a bit more than seafood here--which is just fine by me! My number one favorite dim sum item, lo mai gai (sticky rice wrapped in lotus leaf and steamed), had no egg yolk, dried scallop, or, as far as I could tell, chicken... just meat! 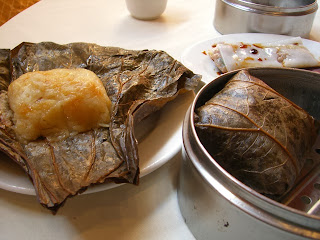 While I like those missing ingredients, I can't say I really missed them. The filling was a delicious combination of ground and shredded meat, mushroom, and each one had a cube of roast pork and a piece of Chinese sausage. (This recipe seems to have changed recently. They're still pretty good.) 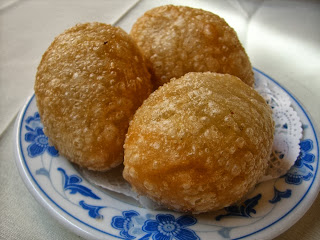 The taro dumplings (wu gok) were likewise still warm--heavy on the ground pork filling and light on the shrimp and mushrooms (not complaining here, just different than what I'm used to). Char siu sou, those triangular, baked flaky pastry roast pork pies, were everything they should be. Pork shiu mai, which so often taste like they've been sitting in the steamer for six hours--and perhaps they have--were served with all flavors fresh and intact. There are a couple in the background, with beef chee cheong fun (steamed rice roll) in the foreground: 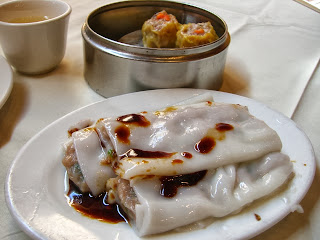 So often, chee cheong fun are somewhat leaden and taste-free. Not these. Flavorful, and almost light.

Turnip cake (lo bak go), another special favorite of mine, was the only offering I was less than enthusiastic about. The texture was rather heavier--and, therefore, gummier-- than I'm accustomed to. Still, because of the larger-than-average dose of ground pork it contained, the flavor was great.

The printed menu contains some intriguing items... one of these days, perhaps I'll make it there for dinner.

There are other Hong Kong style places in Flushing, correct? With many seafood options, I'm pretty sure.

Probably. I just don't know them... yet!