When I first tried it about six weeks ago, Lao Dong Bei immediately took its place among my top three favorite restaurants in Flushing. We were so enthusiastic that the chef came out to chat with us, and we learned a couple of things: that he is the former chef of Fu Run, and that he is from Harbin, one of the northernmost cities in China, quite near Siberia. Ever since I moved to New York City... um... the first time, I discovered that the then-famous Harbin Inn on the Upper West Side had recently closed, and I, geek that I am, had wanted to try Harbin-style food ever since (not that the Harbin Inn necessarily served any of it - I haven't been able to find that out). And sure enough, the fare here tends to be hearty and warming. LDB is the only culinary representative of Heilongjiang province in NYC that I know of (there may well be others - the more I find out about Flushing, the more I realize there is to learn). Lao Dong Bei is also one of the few Chinese restaurants in Flushing whose "English" name is, in fact, the same as the Chinese name: lǎo dōng běi fēng wèi (老东北風味), or "old Dongbei (Manchurian) flavor".

The percentage of dishes I've tried here that I would gladly order again is extraordinarily high. Tonight's meal, however, was the first for which I actually remembered to bring my camera... I was also solo, so I could only order a couple of things (I'll add other standout dishes later).  The meal started with a delightful little free dish of pickled radishes (luó bo - 蘿卜). 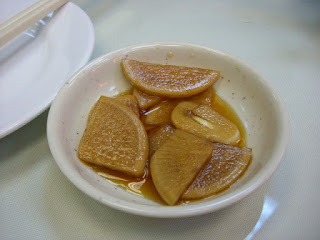 Pickled in vinegar, soy sauce, garlic and hot pepper, I can't remember ever enjoying a radish so much in my entire life.

The weather having just turned colder, I was craving something really warming. I certainly got it! The "Baby Cabbage with Meat Ball Soup" (xiǎo bái cài wán zǐ tāng - 小白菜丸子湯) is possibly the perfect winter soup: warming, satisfying, but not heavy in the least. 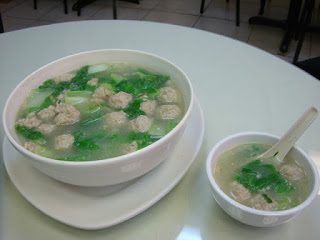 That large bowl is not just some meatballs floating in broth - it's practically solid with meatballs and cabbage. The pork meatballs are actually somewhat delicate, and the broth is enlivened by some minced scallion and ginger shreds. A bargain at $7.50 - it can easily feed 4. 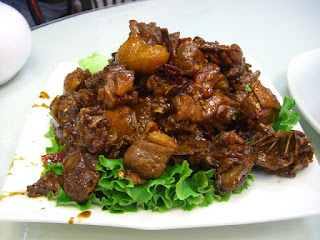 Chunks of duck (on the bone, making it a bit difficult to eat for the uninitiated) braised in beer, star anise, ginger, and more dried hot pepper than you think at first - I noticed my lips were tingling after eating three or four pieces!  It's a warming dish in every conceivable way. 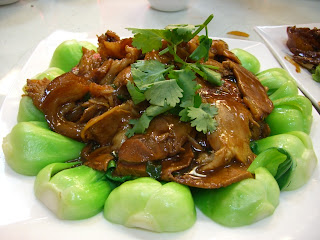 Slices of pork shank (for some reason, pork shank gets translated as "pork elbow" much of the time) are braised in an ever-so-slightly sweet broth until almost unbelievably tender, surrounded by baby cabbage halves. A really lovely dish.

There are several good versions of zī rán yú piàn (孜然魚片, or "Crispy Sliced Fish w. Cumin") in Flushing, and Lao Dong Bei's holds it's own in the top two or three: 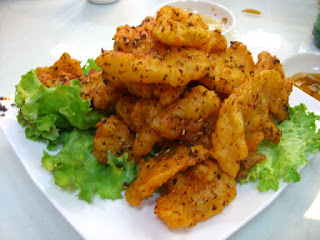 Slices of deep-fried flounder filets are tossed in a mixture of cumin, caraway, and dried hot pepper.

During a recent visit, a free plate of Pork Skin Jelly (ròu pí dòng - 肉皮凍) just appeared. Its appearance was a most welcome one - cubes of pork skin in a milky-white aspic jelly with a dipping sauce of black vinegar spiked with minced ginger and garlic on the side. 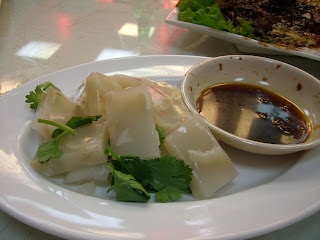 (Cue my mother's question to me years ago, "What's an aspic?"  When I replied, "Well, it's bigger than a toothpick..." I thought she was going to slap me.)

The chef also has his famous "Muslim Lamb Chops" on the menu (here called "Lamb Chop in Xinjiang Style" - xīn jiāng yáng pái - 新疆羊排). They are every bit as spectacular as they were at Fu Run.