I don't know what's going on with Asian food in the Dallas-Fort Worth area, but I definitely approve. Poking around the Chowhound boards - always the best source of recommendations when in unfamiliar territory - I found a write-up of a place called Lal-Qila Indian Food Palace that sounded interesting. It was.

"Indian Food Palace" is a bit of a misnomer, as this is definitely a Pakistani restaurant, and, fairly predictably, halal. They do serve several Pakistani versions of dishes usually thought of as Indian, and I ordered one of them. Goat korma was just fantastic, full of complex and robust flavors, and goat meat that was actually tender. It resembled not at all most kormas I've had, which tend to be much lighter in color and creamier. As you can see (hopefully - once again, dim lighting makes decent pictures almost impossible), this wasn't like that. 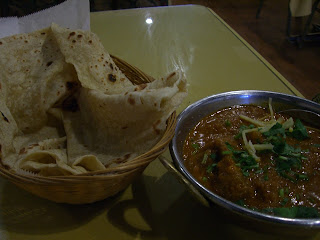 In the basket is a rumali roti, the perfect delivery medium for korma sauce. Rumali roti means, literally, "handkerchief bread". It's an apt name for a big, thin, floppy flatbread, served folded up, very much like... a handkerchief. Much more fun - and unusual - than naan.

Flavors here are all more complex, more assertive, and generally fresher than those of Pakistani food that I'm accustomed to in New York. I arrived just as they were tearing down their Sunday lunch buffet, and they were kind enough to let me taste a few dishes before they went back to the kitchen. Beef nihari - a long-simmered spicy, complex curry dish originally from Old Delhi, then brought to Karachi after Pakistan's independence - seems to be the house specialty. It's pretty great. There was also a fascinating ground beef dish, also from Karachi, called "seekh fry". It's chock-full of indecipherable (to me, at least), earthy flavors... rather amazing, in its way.

I'm definitely going to get there BEFORE 3 p.m. one Sunday before leaving Texas.