Doing a bit of internet research on possible interesting things to eat in Fort Worth, I was quite surprised to find out there is a decent-sized Lao community here. And when an ethnic community reaches critical mass, restaurants - thankfully! - pop up. Sure enough, there are at least three Lao restaurants in Fort Worth and neighboring Haltom City - which is three more than in NYC or its immediate environs. I decided to check out the one with the best reputation first, Sikhay. It did not disappoint.

Not knowing much about Lao cuisine, I had a look at the extremely informative Wikipedia page. While it's difficult to know whether it has been edited people with strong national pride, it appears that Lao cuisine has strongly influenced neighboring cuisines, and that many dishes I had thought of as typically Thai are, in fact Lao (such as larb and papaya salad). If I had actually consulted the article before going, I would not have been slightly puzzled by our friendly and helpful waitress's answer when asked what the most typical Lao dishes were. Her response: larb (or laap, spelled on the menu here as luap) and sticky rice. Laotians apparently eat more sticky rice than... anybody. It's beautifully presented here in its own woven bamboo basket: 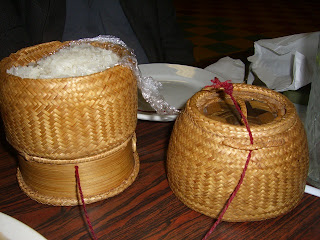 Companions on this occasion were my wonderful Fort Worth Opera colleagues from the Fort Worth Opera Rosa Betancourt (a fabulous soprano - you really must hear her sing - and, as it turns out, cousin of my friend Josue in Puerto Rico who introduced me to Diana's!) and coach/conductor/chorusmaster Stephen Dubberly. They were, fortunately, game to try just about anything, and seemed to like the food as much as I did. The beef luap was a hit - more interesting and memorable than most Thai versions I've had because of the utterly fresh flavors, and the inclusion of bits of stomach, intestine, and tripe with the not-quite-ground, minced beef. (The lighting is terrible in there for picture-taking, so pardon the uneven quality of the photos.) 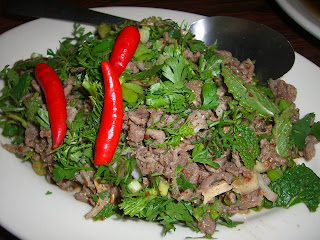 Even more extraordinary was the koi pa, a sort of fish larb. Freshwater fish of some stripe (Laos is landlocked) is minced and marinated in lime juice and fish sauce, then seasoned with cilantro, mint, lemongrass, and chilis, and served as a salad. Clean, vibrant, yet subtle flavors make this a truly special dish, seen here with the typical Lao meal accompaniment of chopped, raw greens (in this case, cabbage and cucumber): 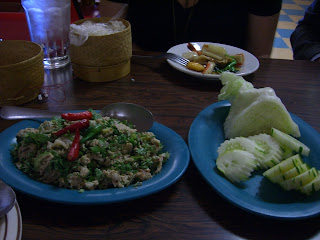 I thought I saw what looked like fresh dill in this dish, but couldn't isolate its flavor in the mix, and thought, "dill isn't used much in southern Asia anyway". But apparently Lao cuisine, in fact, does use dill - who knew? Perhaps there was some in there after all.

The appetizer section of the menu contains some true gems. "Fried chickens" is a plate of disjointed chicken wings that have been beautifully seasoned and deep-fried. 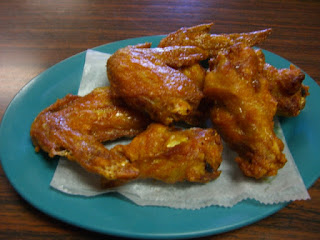 Utterly extraordinary are the "Asian Sausages" (sai oua). These are the most beautiful sausages I've had since those of Sister Zhu's now-defunct Maple Snacks stall: quite obviously homemade sausages made with pork, galangal, lemongrass, hot pepper, kaffir lime leaves, and fish sauce (for just a hint of sweetness). You MUST taste these. 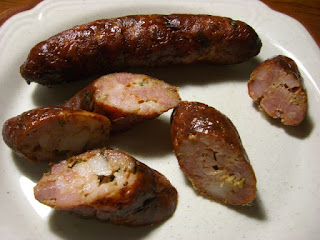 Our waitress seemed keen on on the seafood ladna (often spelled lard na). This turned out to be as mellow in flavor as the other dishes were vibrantly spiced: bits of scallop, crab(stick), shrimp, and squid in a mild brown gravy, poured over chow fun noodles (the wide, flat rice ones). Very nice. 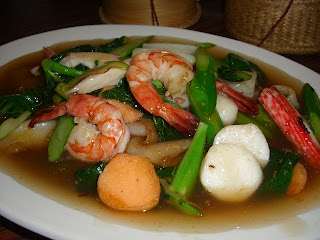 Their red curry with chicken is also well worth eating. A really beautiful balance of flavors: curry, coconut milk, kaffir lime leaves, galangal, basil, to mention just some of its components. This marks the first time I actually enjoyed eating Thai eggplant (the small, round ones - just not a fan). 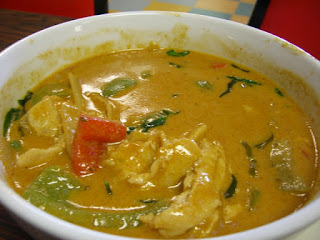 The papaya salad (tam mak hoong) was, flavor-wise, the fieriest dish on the table. Shredded green papaya in a marinade that is a bit less sweet and quite a bit more robustly flavored than any Thai version I've had. Fantastic. 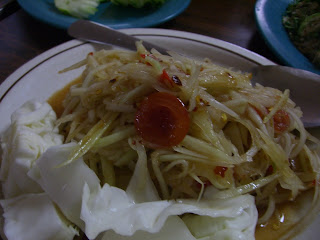 Closed Tuesdays. But you should definitely give them a call before going - twice now I have gone out there at times they were supposed to be open, only to find them closed.