I had eaten at Hunan House (湘水山莊 – xiāng shuǐ shān zhuāng, or Xiang River-the symbol for Hunan province-mountain villa) a couple of times before and somehow didn't love it. Then they were closed for a while for renovations, and recently re-opened. I had been hearing good things and decided to give it another try this evening. I'm glad I did.

Their version of the cold ox tongue and tripe appetizer fū qī fèi piàn (夫妻肺片) is quite competent. While the sauce is not as complex and interesting as Hunan Kitchen of Grand Sichuan’s, the quality of the tongue meat and tripe is much better. 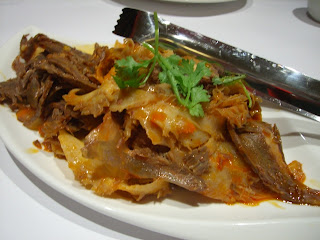 The "Lamb in a Wooden Bucket" (木桶羊肉 - mù tǒng yáng ròu) turned out to be a delightful, spicy stew of lamb rib meat and rind, peppers, scallions and straw mushrooms. Beautifully rounded flavor – just delicious. I realized as I was eating this that I had never been served straw mushrooms before that weren't from a can. I had no idea that fresh ones were so lovely! 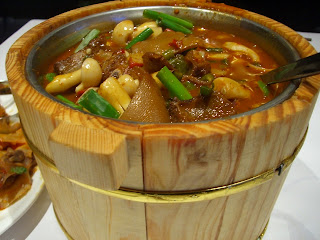 The real star of the meal for me, though, goes by the name of "Steamed Preserved Meat" (臘味三蒸 - là wèi sān zhēng) on the takeout menu. It's not even listed on their quite haphazardly-organized in-restaurant menu, and I'm certainly glad I asked about it. Ever since I ran across Fuchsia Dunlop's recipe for "Smoky Flavors Steamed Together" in her Revolutionary Chinese Cookbook, I had been wanting to taste such a marvelous-sounding dish, and, as far as I can tell, none of the other Hunan restaurants around town offer it. Hunan House's version is spectacular, with Chinese bacon, preserved beef, preserved duck, thin slices of smoked bean curd, and just enough hot pepper to cut through the dense thicket of flavors. Definitely more than the sum its parts, I could eat this dish every night for the next week. 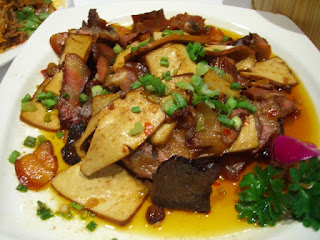 The experience produced one sour note: since this place is a bit more expensive than most of the places I write about (but still a good value), I decided to charge the meal to a credit card. (Unlike most of the places I write about, they do accept credit cards). The check folder and takeout menu both say they accept American Express, but when an American Express card was tendered, we were told they don't accept it. They either need to start accepting the damn card or stop indicating to the public that they do.