I recently ran across a reference to Xiao Du Hui (小都會) online and wondered why I had no clue as to what it was. I have walked past the place dozens of times and never noticed it. But sure enough, there it was, right where the address said it should be. The menu looked interesting and the prices were most definitely right, so in I went.

Xiao Du Hui (小都會 - xiǎo dū huì, which seems to be a way of saying "small town") serves Fuzhou-style food, Fuzhou being the capital of Fujian province in the south. It's a tad surprising to find a Fujianese restaurant in Flushing, bastion of the northern Chinese that it is – most of the Fujianese in New York gravitate toward Manhattan and Brooklyn Chinatowns. But it's there, doing a brisk business for what I have to believe are mostly Fujianese workers around town. The décor is not much to speak of – it is, in fact, a bit dingy – but that’s not why I go to restaurants, obviously. The food is honest cooking for ordinary people. There are very few frills, and it seems that, besides a better-than-average English menu translation, very few concessions are made for Westerners. It may not be for everybody, but it is for me. And it is most definitely a bargain.

Ye frugal diners out there will want to turn directly to the end of the menu, where the heading is not translated into English, but the price of $12.99 is prominently displayed. This page is a sort of family menu, and the price of $12.99 includes one soup from a list of 15 or so at the top (and one soup is large enough to feed 2 or 3) and TWO dishes from a list of almost 70 below that. And if you’d like an additional dish from the list, it's an extra $5.00. Two moderately-hungry eaters (or, that is to say, one of me) will be sated by the two-dish-plus-a-soup menu. Add another dish and you’ve got a small feast for two big eaters... for 18 bucks!

A free dish of preserved radish immediately appeared on ordering. It bears only the most superficial resemblance to the luó bo (蘿卜) at Lao Dong Bei. 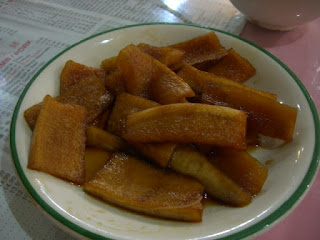 Xiao Du Hui's is sliced thicker, not at all spicy, barely vinegary, and slightly sweet. And almost as nice, in fact – just completely different.

I went with the "Golden Fish Soup" (jīn qián yú tāng - 金錢魚湯), mostly because I had no idea what to expect. Even so, it was unexpected: a clear soup of small slices of what seems to be called argus fish or spotted scat in English and slices of winter melon in a sour broth. This fish is not for people who are put off by particularly "fishy-tasting" fish... it’s slightly oily and has a strong flavor. But it works beautifully with the winter melon, and the sour broth cuts the oily quality perfectly. 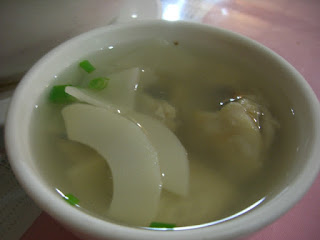 The "Beef Short Ribs with Salt and Pepper" (jiāo yán niú xiǎo pái - 椒鹽牛小排) were thin slices of cross-cut short ribs (on the bone, of course) coated in a salt-and-pepper seasoned breading, deep fried, then tossed in some chopped scallions and spicy green pepper slices. Delicious 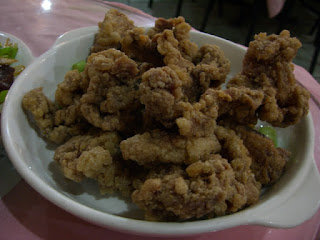 If I hadn't learned some Chinese characters along the way, the "Grilled Meat with Garlic" (suàn miáo là ròu - 蒜苗臘肉) would have been a total shock. But I was ready for the stir-fry of slices of preserved pork and garlic greens that arrived at the table. This is pork preserved in a completely different fashion than that of my Hunan meal the night before – Xiao Du Hui's is a bit sweet and not the least bit smoky. Garlic greens always taste like leeks to me… I guess I'm just not as discerning when it comes to vegetables as I am when it comes to meat. A nice, homey dish. 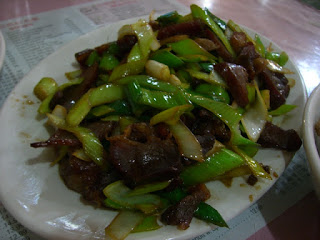 On a subsequent visit, I tried the seaweed, tomato and tofu soup (fān qié zǐ cài dòu fǔ tāng - 蕃茄紫菜豆腐湯) It was less interesting than the Golden Fish Soup, mostly because the tomatoes – under-ripe and of the supermarket hothouse variety – almost completely lacked flavor. Since tofu hasn't much flavor on its own, this meant the soup was dominated by the taste of the (to my mind, overcooked) purple seaweed (nori). I thought the whole thing was under-seasoned, but that could just be my penchant for strong flavors. Personally, I'd advise skipping it. 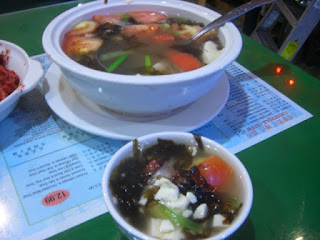 五更牛什 (wǔ gēng niú shí) goes by the curious name of "Wu Gen Beef Muscles" on the menu. The literal translation is hardly less curious: Fifth-Watch Beef Entrails. Apparently, the name is taken from the period of time just before dawn, which is supposedly when one needs to start cooking the beef bits in order for them to be ready by lunchtime. And there is quite the assortment of beef bits here - brisket, various sinews, and at least three kinds of tripe – stewed with celery, peppers, and sour cabbage. It's a bit spicy and quite sour, and tastes very southeast Asian to me – rather like a sour curry. It’s not quite my thing – I do seem to prefer the cooking style of Chinese parts a bit farther north – but I think the dish was well-prepared, neophyte that I am to Fujianese cooking. 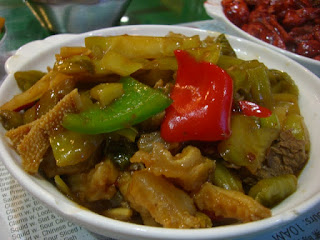 "Chicken with Food Chow Sauce" (sic) (糟雞 - zāo jī) is my favorite dish here so far. It turned out to be ultra-tender, juicy chunks of on-the-bone chicken simmered with that signature Fujianese ingredient, red wine lees (紅糟 - hóng zāo). Besides ginger, I couldn’t actually figure out what else was in the sauce. All I know is that whatever they do here, it makes the chicken taste like the chicken I used to eat in Portugal… more "chicken-y", somehow, than most chicken in the U.S.  It's a mild dish – don’t be misled by its startling color – and, unlike so many other dishes made with wine lees that I've tried, not the least bit cloying. Absolutely delicious. 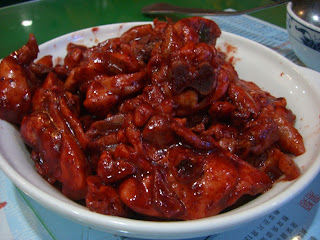 The rest of the menu is huge and varied, with a lot of dishes you don't see just anywhere. Lots of noodle soups and rice noodle dishes, too. And they're open until 4 a.m.!