A few more dishes to touch upon after subsequent visits to Happy Garden Palace...

After reading a bit more about Fujianese cuising and learning that meals often count more than one soup among its dishes, I decided I needed to try some of them. Spicy and Sweet and Sour Fish Soup was definitely a winner. Not so sweet, really--it was very much like a clear-broth hot-and-sour soup with pieces of fish. 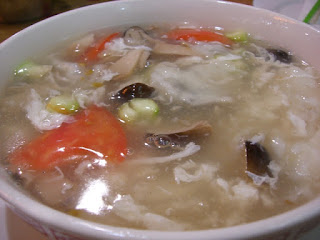 The Fish Head with Sour Cabbage Soup was also very good, and, perhaps oddly, quite soothing. The fish-head chunks are chock full of oddly-shaped bones, however--if such things annoy you (and I know many people that it does), skip this one entirely.

"Stew Duck over Rice" had a wonderful flavor (wine lees working its magic again), but also has the bone issue... all those duck bone shards were starting to annoy even me. At under four dollars for a big plate of it, though, it's a steal, shards and all. "Chinese Broccoli Sprouts with Red Wine" (wine lees again!) were actually leafy tops of mature plants. I thought they could have benefitted from a slightly longer cooking time... my friend Pan (of the Chowhound and eGullet boards) liked them "crisp" like that. "Chewy" is the word I would have chosen, but the flavor was great. And they make one of the best versions I've tried of my absolute favorite variety of fried rice--Salted Fish and Chicken Fried Rice. Once again, practically a steal at under five bucks for a small platter. It's usually twice that elsewhere. 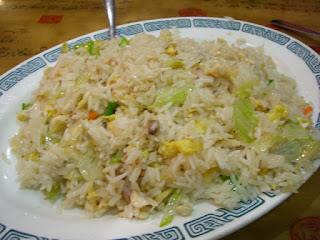 Because the "Lamb with Bean Stick (Happy-Garden-Palace-speak for tofu skin) in Casserole" had looked so good at a neighboring table, I ordered it the next visit, and it's the only dish I've had here that I found somewhat less than enthralling. It's a Cantonese dish, so... no red wine lees. I know that ingredient technically doesn't belong there, but I couldn't help but think that it would have improved its relative blandness. The Beef Stew with Curry in Casserole remains unchallenged so far as my favorite dish here.

I'm afraid I enjoyed my meal this evening somewhat more than Pan did. A couple of the employees have a nasty habit of smoking right by the propped-open front door of the restaurant, whereupon the smoke wafts directly in, and Pan is quite sensitive to it. Four years of living in Portugal got me over that, but be forewarned of the possibility of cigarettes in somewhat closer-than-ideal proximity.
Posted by Mahlzeit! at 2:40 AM