One of the great tragedies of my neighborhood in the last few years was the closing of La Rosita. Facing an unconscionably large rent hike, they had no other choice (and now, almost 3 years later, the space is still vacant... might it not have been better for the landlord to accept a bit less rent than to collect no rent at all?), and my neighborhood lost a treasure. We are left with very few options for good, reasonably-priced eats in these parts. One of the only ones is Bombay Frankie.

Their specialty is the "frankie", kind of street food from Bombay that consists of roti bread rolled with various fillings. While word is that it's not particularly authentic, it's still pretty damn tasty, freshly prepared, and the price is right. My current favorite is the chana masala frankie ($4.50 - add egg for $1.00) - curried chickpeas. Ask for it spicy (even so, it's still quite tame). 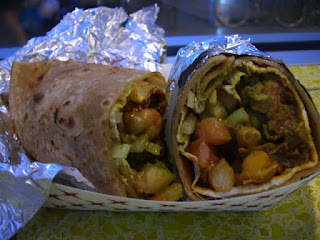 Also good is the unda aloo masala frankie--egg with a spiced mixture of chickpea and potato, and the pickled paneer frankie is delightful. Oddly - especially for me! - I find the meat frankies much less interesting. If there was any actual spice involved in the preparation of the chicken malai frankie, I could not detect it.

Now if they could just make a cafe con leche like La Rosita used to... and while I'm wishing, perhaps a cubano sandwich...