Another visit to Traditional Hunan Style in Flushing this evening – it's nice to see they're becoming popular. Unfortunately, the popularity is strong among rude, drunk Chinese. More on that later.

Their spicy beef tendon (or, as it’s listed on the menu, "beef tender") appetizer is excellent (湘味辣牛筋 - xiāng wèi là niú jīn) – ribbons of very thinly-sliced tendon in a delightful, complex spicy sauce. Indeed, the flavor of this dish was more complex than anything else we tried.

The sweet but confused waitress got our order wrong and ended up bringing a dish we hadn't ordered (for which we were charged, naturally – we only realized it wasn't the one we had ordered after we had eaten half of it and the one we did want arrived). It turned out to be the best of the three main dishes we tried: 湘式熏腊雞 (xiāng shì xūn là jī – Hunan-style smoked chicken). The menu calls it "House Special Fried Chicken": small, bone-in chunks of smoked chicken, stir-fried with red and green bell peppers, dried hot pepper, ginger, scallions, and black mushrooms. Reasonably tasty, although it was much like eating a chicken version of the White Jalapeño Chinese Preserved Meat I had last time, but not as good. In fact this place seems to use the exact same complement of vegetables for all their stir-fried dishes, as far as I can tell. 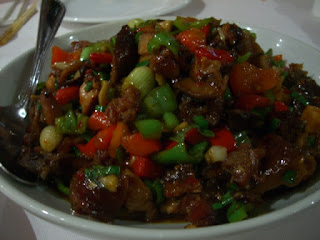 The chicken dish we actually had ordered arrived several minutes later, "House Spicy Chicken Szechuan" (三椒煸雞 - sān jiāo biān jī, or three pepper fried chicken). Minus black mushrooms, this dish was almost identical to the one already on our table, except the small chunks of chicken, rather than smoked, had been deep-fried. There was no need to take a picture of it because it looked... exactly the same as the first dish.

"Zi-Ran Lamb" (孜然羊 - zī rán yáng, zī rán meaning "cumin") was a dud. Once again, it looked exactly like the other dishes, with slices of lamb instead of chicken, plus a grainy, runny sauce in the bottom of the bowl.

It appears that I had two of their very best dishes on my first visit. I wouldn't order any of the above – except the beef tendon – again.

That question, though, is moot, since I will never again be visiting this restaurant. We were seated near a large table of drunk Chinese that were openly and loudly mocking us. One certainly did not need to be able to understand whatever Chinese dialect they were shouting (it sure wasn’t the kind of Mandarin one usually hears) to grasp the intent of their glances of derision and gestures of ridicule, and the staff feigned obliviousness to it all. I have never before been made to feel so unwelcome in any restaurant in Flushing (although friends of mine have), except once, but the vibe was so bad I left before sitting down. Interestingly, it was on the same block (with the singularly inappropriate name of "Welcome Inn") – perhaps the fact that 40th Rd. is chock-a-block with happy-ending massage parlors and tour buses to and from casinos in Connecticut has something to do with it.

My admittedly drama-prone friend made a show of wiping the slime off his feet and spitting on the ground upon exiting the restaurant. In fact, not an inappropriate gesture.