Until the intrepid scoopG wrote about it on Chowhound, I had completely missed the existence of the recently-opened Traditional Hunan Style (天天湘上) on a crowded side street in Flushing. His review made me want to try it immediately, and now that I'm back from Texas, I finally got my chance. It is a worthy destination for lovers of spicy food.

As scoopG points out, its Chinese name 天天湘上 (tiān tiān xiāng shàng) is a play on the common phrase 天天向上 (tiān tiān xiàng shàng), or "improve every day". 天天 means "every day" or "day-to-day", but the key pivot syllable of the restaurant's name, 湘 (xiāng), is the name of the largest river in Hunan and is a sort of shorthand way of referring to the province.

Most of the dishes we ordered made me want to try most of the rest of the menu immediately. The only one I wasn't crazy about was the first of their "steamed spicy dishes" category, Steamed Spicy Shredded Pork, Squid, Chicken (水煮三絲 - shuǐ zhǔ sān sī, or "water-cooked three shreds). "Steamed" is a misnomer, here: the dish is meat and vegetables cooked in a spicy broth. The preparation is almost identical to its Sichuan couterpart (the name 水煮 (shuǐ zhǔ) is identical), minus the Sichuan peppercorns. It was good - shredded pork, chicken, and squid boiled with cabbage and bean sprouts - but it's not one of my favorite Sichuan preparations, either. I guess I had hoped it would somehow be more different. 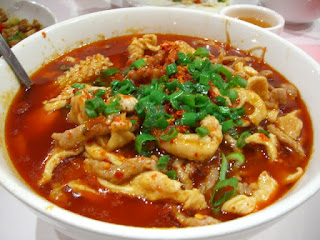 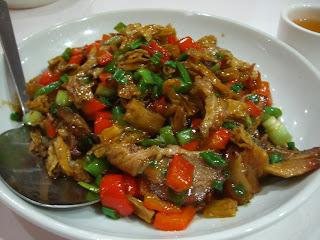 Salt Egg with Shredded Potato (鹹蛋黄土豆絲 - xián dàn huáng tǔ dòu sī) reminded me at first of a one-dish breakfast. Potato shreds with vinegar is a dish I've enjoyed many, many times, but eschewing the vinegar in favor of salted egg yolk gives the dish a mellowness and richness that was somehow unexpected. I absolutely loved this dish. 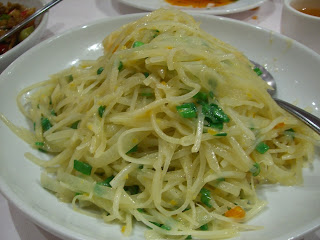 There are several endearing mistranslations and typos on the menu... my favorite is "praised pork". I hope they never change it.

Open until midnight every day.