And with all the different place-names mentioned in its menu and signs, there is no mention (in English, anyway) that this place is actually Henan (in its "Sliced Noodle" days there were Chinese characters indicating that on prominent display). The menu, consisting mostly of dumplings, noodle soups and other noodle dishes, is quite similar to that of Henan Feng Wei and Uncle Zhou’s. They even have that Henan favorite from Xinjiang, dà pán jī (新疆大盤雞 - xīn jiāng dà pán jī), or "big tray o’ chicken" (there’s a description and picture of it in my post about Henan Feng Wei).

If you order hand-pulled noodles (拉麵 - lā miàn), the noodle guy comes up front and pulls some fresh for your dish: 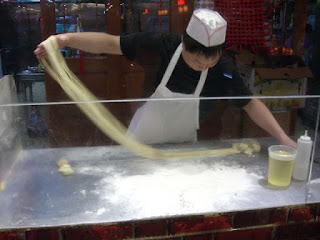 Order some knife-shaved noodles (刀削麵 - dāo xiāo miàn), and if you position yourself toward the right-hand side of the counter, you can catch a glimpse of him shaving off the noodles from a block of dough into a pot on a stove in the back.

But when I come here, I can’t resist the pan-fried dumplings (開口鍋貼 - kāi kǒu guō tiē). They are made "open-mouth" style (開口 - kāi kǒu), i.e. not sealed up on the ends, and fried together in a pan in such a way that a starchy film connects the all the guō tiē, which are then turned out onto a plate. 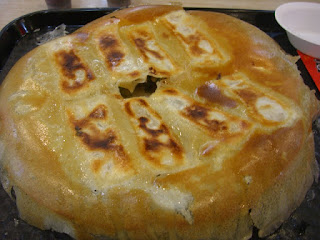 And here’s one of the dumplings, open end visible and some crispy starchy film attached (it can be tricky when using chopsticks to keep the meat from slipping out of its sheath): 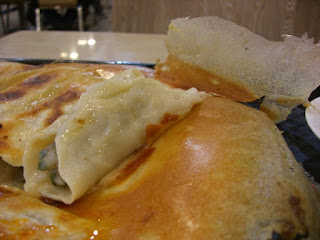 Have them with a mixture of hot pepper oil and black vinegar. Along with those at Nán Běi Shuǐ Jiǎo (南北水餃, in the Golden Shopping Mall), some of my favorite dumplings in Flushing. At $4.99 for eight, they’re not cheap, but still a good value.