(More accurately, it has changed hands.  While the new menu has some similarities to the old, it is not a place I can recommend.)  At this point, in my rather advanced stage of culinary wanderings, it's quite unusual for me to get a meal that consists almost entirely of dishes that resemble nothing I have eaten before. But that is exactly what happened this evening at M & T Restaurant in Flushing.

Let me hasten to add this is a wonderful thing. M & T specializes in food from the city of Qingdao (also spelled Tsingtao, home of the beer) in Shandong, the northern coastal Chinese province across the Yellow Sea from Korea. My intrepid dining companion Jose and I tried 5 dishes, and if our particular cross-section is any indication, it seems that Qingdao cooking goes for simplicity and boldness: most of the dishes showcased two ingredients, with very little else in the way of extras or fillers. Luckily, Jose, being of Filipino extraction, was more familiar with many of the ingredients and preparation techniques than I was.

After a complimentary teaser of a "salad" of boiled peanuts, diced celery and carrot (lightly flavored with sesame oil)... 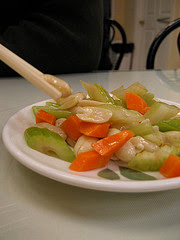 ...we had two cold dishes to start. Somehow, when I ordered "Tree Mushroom with Mustard", I was expecting some combination of tree fungus and mustard greens. But no--it was a plate of boiled tree fungus (wood ear, cloud ear... whatever you want to call it) with a mustard dipping sauce on the side, the flavor of which was somewhere between Chinese mustard and wasabi, and it was fantastic. 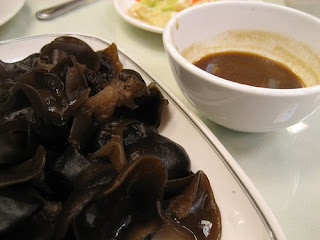 The "Qingdao Cold Pasta with Special Sauce" turned out to be thick, square clear "noodles" made of agar agar in a black vinegar sauce. There was some shredded cucumber for texture contrast, some cilantro, and a generous dollop of minced garlic to kick things up a bit. 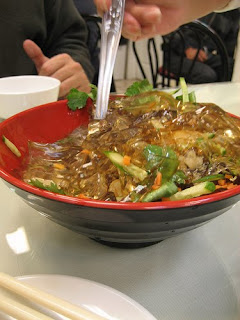 This dish belongs, I think, in the "acquired taste" category, but--as Jose sagely observed--it must be very refreshing in hot weather.

Since it was nippy early autumn evening, the ensuing hot dishes were especially satisfying. As we tried each one as it would appear, one or both of us would utter something like "Oh, wow..." (this is not, for me, at least, normal). "Sauteed chicken" turned out to be chicken chopped into small pieces (bone in--chickens are almost never boned in real Chinese cooking) and dry-sauteed with lots of dried red pepper and Sichuan peppercorns. Simple and superb... someone back in the kitchen knows exactly what they're doing.

"Pork Rib with Shrimp Paste" was breathtaking in its deliciousness: thin pork chops sliced up, coated with shrimp paste (and perhaps some cornstarch to hold it all together) and deep-fried. 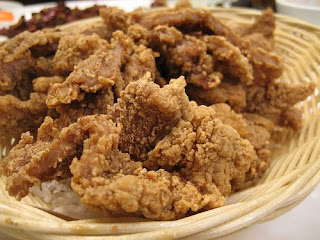 And I've most certainly never tried anything like the "pumpkin cakes" before--grated pumpkin mixed with rice flour, formed into quarter-inch-thick patties, very lightly breaded and fried. A perfect autumn snack. 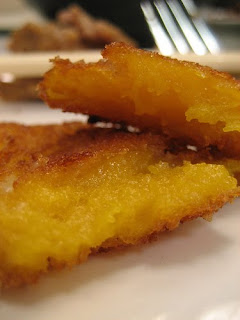 Ours was literally the only table in the place that had not ordered the "Sea Worm with Chinese Chives", sea worm being some sea creature (a specialty of Weihai, apparently) that looks like whole-wheat ziti when cooked. I suppose I'll have to give it a try next time.

Be ready--the menu is huge. In addition, it seems that most of the specials listed in Chinese only on the wall have found their way into the two extra, loose laminated sheets of "house specials" that arrive with the regular menu... one could ponder all of it for hours. Luckily, both waitresses speak English very well and are happy to offer descriptions and ordering advice. With the wealth of choices, it is absolutely necessary, and much appreciated.

(Special thanks to Jose for the photos.)