A couple of days ago, I returned from a two-week tour of Mexico with the Orquesta Filarmónica de las Américas (Philharmonic Orchestra of the Americas). It was a hectic tour schedule that left very little time to explore and find good food (except in places where I didn’t want it, like the Polanco neighborhood of Mexico City--ick--it might as well have been suburbia), but I did eventually sniff out some meals worth writing about.

The first of these was in Zacatecas, almost a week into the tour, and by that time I was more than ready to eat something worth writing about. Zacatecas is a normally-quiet mining town with real 18th-century charm, the most beautiful place we went the entire tour. We, of course, managed to arrive on the eve of an anniversary of some event, the nature of which I have forgotten, which was celebrated by shooting off guns in the main square. Luckily, very near that main square is a local institution: Gorditas Doña Julia. It’s a simple establishment, and very easy to miss because the most obvious sign above the doorway says “Hotel Posada de la Moneda”. But once you’ve zeroed in on it, be prepared for hearty, honest, expertly-prepared food. The only thing they do here is gorditas: thick, round, tortilla-like bread cooked on a griddle, then split like a pita and stuffed with a wide variety of fillings. (Thanks to Melissa Tong for the photo.) 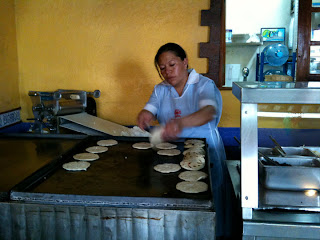 Doña Julia has at least twelve, and between Kerrick—-my intrepid tour roommate and dining adventure companion—-and myself, we were able to try about half of them. Our favorites were picadillo (seasoned ground meat with diced carrots, potatoes, and peas), deshebrada (shredded pork and cubes of potato in a spicy sauce), and arroz con mole (rice and mole sauce). (Photo: Kerrick Sasaki) 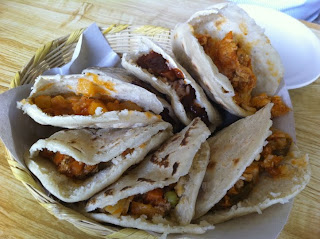 Vegetarians, be advised that the mole contains chunks of pork—-a couple of vegetarian string players in the orchestra found that out the hard way! But really everything here is delicious, from huevo (scrambled eggs) to carne de puerco (pork in a mildly spicy sauce), and friends attested to the deliciousness of the nopales (prickly-pear cactus in a very spicy sauce) and rajas con queso (strips of roasted green chile peppers and cheese, also quite spicy). And at 10 pesos apiece (about 80 cents), they're an unbelievable bargain.

Well, Doña Julia is like a franchise. there are at least 2 or three of them in downtown Zacatecas, you'll find some more in the suburbs.

I've tried the street stand version of Zacatecan gorditas, and I think they taste much better than DoñaJulia's. Also they're usually inexpensive at about 6 to 8 pesos a piece.

I guess spicyness depends on who prepares the fillings, I've tasted some of the ones you mentioned and they are not spicy at all.

I have no doubt what you say is true. Unfortunately, there was no time to go investigating street stands.

And I only say “spicy” to warn others. I never had ANY food in Mexico I thought was particularly spicy, even when warned that something was “muy picante”.