After Oaxaca, we returned to Mexico City to rehearse and perform what turned out to be a rather amazing concert: Philharmonic Orchestra of the Americas (or Orquesta Filarmónica de las Américas, if you prefer) was the opening salvo of the musical performances invited to play at the huge bicentenario celebration of Mexico’s independence in Mexico City on Sept. 15. There is a clip on YouTube of the first work we played (which I guess was broadcast all over the world… who knew?), the Danzón No. 2 by Arturo Marquéz, where you can see yours truly engaging in one of the activities that actually helps pay his rent. You can watch it here, and there are clear shots of me at mins. 1:09, 5:22 and 9:30. The orchestra was then joined by some very well-known Mexican singers--Natalia LaFourcade, Ely Guerra, and Lo Blondo--who sang a selection of Mexican songs, marvelously arranged by Lev Zhurbin. This took place on a stage set up at the Ángel de la Independencia, in front of a reported 25,000 people standing in the plaza and the surrounding streets... definitely the biggest party I've ever played for! It was thrilling in a way I never expected... but, after all, we classical instrumentalists are definitely not accustomed to being received like rock stars!

This time in Mexico City, we were a bit more centrally located than before, adjacent to the neighborhood known as the Zona Rosa. Quite unexpectedly, the area is home to a large number or Korean establishment (among its many diverse attractions)--there are at least 15 or 20 Korean restaurants in a 3-square-block area. For lunch one day we picked one (Song Lim, c/Liverpool 158, 2nd floor--but there is no Western writing on the sign, only Korean and Chinese), and were rewarded with, among other things, jja jang myun that actually tasted like jja jang myun, and a fun budae jun gol. 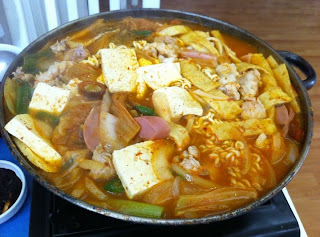 I must say, that was about the last thing I ever expected to eat in Mexico!

This neighborhood was the scene of what turned out to be my favorite meal in Mexico. My first evening there I was strolling through the area, seeing what there was, sniffing around, when I passed a very simple establishment--almost a hole in the wall--that smelled terrific. The sign said they served Yucatán-style food… I had no idea what that was, but I was determined to find out. They were about to close for the evening, so I resolved to return for lunch the next day. And return I did to “Los Arcos” - Antojitos Yucatecos. Upon inquiring as to the especialidad de la casa, I was told chamorro. Sold... without having any idea whatsoever as to what was actually going to arrive at my table! But I was willing to put my complete trust in any place that smelled that wonderful, and I was rewarded with the most delicious pork shank I have ever tasted. It arrives in a small trough, with an inch or so of deep orange-red broth on the bottom. The shank has been stewed with achiote seed paste (which gives the broth its distinctive color), a little vinegar and some spices, and served with tortillas and two kinds of onion relish (once again, I was warned that one of them was ¡muy picante!, and it was... a little spicy). The idea is much like eating carne en su jugo in Guadalajara: 1) eat a slice or two of pork, slurp some broth, make a little wet taco with some of the meat and some onion relish. 2) Repeat in any order. 3) Experience bliss. This feast set me back 5 dollars. They prepare chicken much the same way (pollo pibil), too.

I’m not sure I can explain just why I have such incredible fondness for this meal. I’m sure there are more beautifully and carefully prepared versions of this food around, in plusher surroundings. But there is something simple and honest about this place and their offerings... real food for REAL people, and it was a privilege to be able to mix with them for a few minutes and get a taste of something extraordinary.