After the travel day from hell getting to Oaxaca, the LAST thing I felt like doing the next day was playing a concert, I was so damn tired. I also particularly wanted to try one other restaurant in town: La Casa de la Abuela. In an unexpected stroke of luck, the concert was an hour earlier than most of the others, and the restaurant was still open after the concert.

La Casa de la Abuela is much more the kind of restaurant I’m normally drawn to—-very traditional, nothing fancy... grandma-type food. And since “abuela” means grandma, I thought that boded well (it did). Kerrick (note to K: send me those pictures already!) and I shared an appetizer of taquitos de picadillo en mole coloradito (rolled tacos of seasoned ground meat, fried crisp, with coloradito, or reddish-brown, mole sauce). 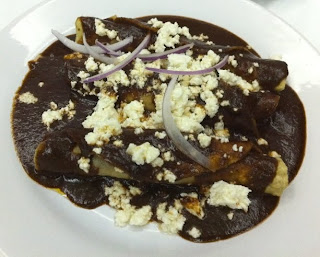 That mole coloradito was, for me, THE most mind-blowingly wonderful mole I have ever tasted, including the mole negro at Casa Oaxaca the night before. “Complex” hardly begins to describe it... you’ve just got to go try it for yourself. For the main course, I had chicken with mole negro (not as great as the one the night before, but quite good), and Kerrick had the plato de la casa, a combination plate of six or seven varied items. 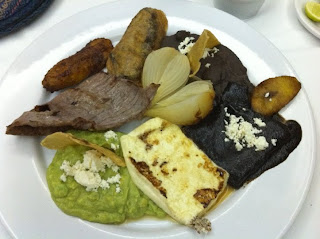 For me, the best ones were the tasajo, a variation of Mexican cecina (NOT Spanish cecina!--thin slices of beef that are salted and dried for a couple of days, then grilled), and a chile relleno unlike any I had tried before (top center, above the tasajo)—-it had a rather sophisticated pork filling, was battered, then fried... delicious. Also on the plate: a square of grilled cheese, an enmolada (a sort of simple mole enchilada), guacamole, frijoles, a cebolla asada (roasted onion), and a fried plantain. Good, simple, rustic fare.

To sum up: as far as I’m concerned, there are two moles you cannot miss when in Oaxaca—the mole negro at Casa Oaxaca, and the mole coloradito at La Casa de la Abuela.