The next stop on the tour after Zacatecas was Guadalajara, where we were fortunate enough to have a whole afternoon and evening to explore. After perusing the Chowhound boards, I had decided the two things I absolutely had to try in Guadalajara were torta ahogada and carne en su jugo. So, that afternoon Kerrick and I set out to walk from our hotel near the Expo to the centro histórico and the Mercado Libertad (purported to be the largest market in the western hemisphere--it is indeed massive). The walk took well over an hour, and by the time we arrived at the mercado, we were ready for some sustenance. The seemingly endless maze of food stalls on the second floor seemed like the ideal place to try torta ahogada, so we picked a stall at random (one of the several we passed called Rosita—-it features three or four bubbling cauldrons of stewing meats on display up front) and ordered our tortas. They were pretty great: chunks of stewed pork in a bulky, crusty, hero-type roll which is then “drowned” (ahogada) in a thin sauce of red chile, the spiciness of which can be adjusted to your taste. (Photos by Kerrick Sasaki) 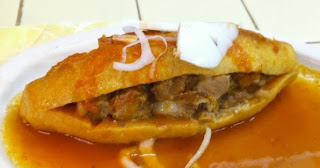 I loved it so much, I decided I had to have another before leaving Guadalajara, so the next day between our rehearsal at the theater (the Teatro Degollado in Gudalajara is the most visually and acoustically gorgeous theater I have ever had the privilege to perform in) and the concert, I dashed a few blocks south to a fairly well-known place called La Gorda for another one. Skip this—-it was but a pale imitation of the soul-satisfying experience of the day before.

By the time we made our way back toward the hotel after our mercado experience (that place is wild—-it has to be experienced to be believed), it was time for dinner, and in my mind that meant one thing: carne en su jugo. Luckily, what is probably the best-known purveyor of this dish in Guadalajara has a location near our not-particularly-centrally-located hotel. Karne Garibaldi has it down to a science: the moment you are seated, you are brought the “fixins”—small tortillas, red chile sauce, chopped white onions, chopped cilantro, limes, refried beans spiked with corn kernels, tiny fried corn tortilla chips and lard (lard really makes everything taste better), and fried cebollitas cambray (spring onions much like the calçots of Catalunya, minus the greens). 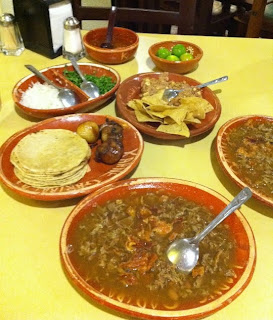 All that’s left is to decide on the desired size of your meat and what you want to drink. Again, almost immediately a shallow earthenware dish appears full of what looks like small pieces Philly steak meat swimming in a rich beef broth, with bits of crisp bacon on top. The whole spread is actually a bit overwhelming, and we were glad to be able to observe the plan of attack of a neighboring table seated at almost the same time as us. It worked beautifully: drizzle a few spoonfuls of red chile on the meat, then sprinkle some chopped onions and cilantro… maybe a squeeze of lime. 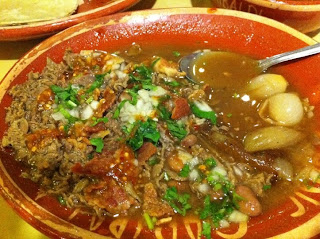 Mix a bit, slurp some of the utterly delicious broth, munch a few pieces of beef, make an impromptu taco with the tortillas-—with or without refried beans, according to whim—-repeat in any order. The meal couldn’t have been simpler in conception, or more inspired. And it’ll run you less than 10 bucks a person.

This seems to me such a great idea, I can’t imagine why it hasn’t caught on in the U.S. No exotic ingredients are required, preparation on the restaurant’s part is not complicated, and the final dish can be adjusted to literally anyone’s tastes (well, perhaps not vegetarians, but who cares?).

Guadalajara locals seem to agree that Karne Garibaldi is not actually the best place in town for carne en su jugo-—that prize apparently goes to Kamilos 333. But a trip to the Santa Teresita neighborhood was not possible this time, and I did not feel deprived in the least.