It had been a long week, and I was in the mood for something heavy and comforting to eat this evening. A quiet craving for Polish whispered to me, and I suddenly realized I hadn't had Polish food in over year. My favorite East Village joint, Christina's, had closed sometime in the last year or so and I could never get too excited about any of the other ones... this left Greenpoint, Brooklyn as the obvious destination. After a bit of internet research, I decided on Królewskie Jadło, which is Polish for "King's feast".

Not bad. Many of the things we tried were really very good, but not good enough to quell my yearnings for Christina's white borscht, or their breaded chicken cutlet--you could hear them pounding it in the kitchen after ordering it--or their sauerkraut with at least 3 kinds of meat baked in, or their cheese babka... KJ's chief attraction is it's utter cheapness: there is literally nothing on the menu that costs more than $9.00, and that is a combination plate of Polish favorites by all reports unfinishable by one person (except maybe me). Otherwise, it tops out at $8.50.

Upon being seated, you are immediately presented with a plate of excellent light rye bread, some homemade pickles, and a dish of smalec. The word is, obviously, the Polish cognate of "schmaltz", but this is all pork: lard, with pieces of bacon and onion. Spread it on bread, like butter. Eat. Experience nirvana. And the Żywiec beer on tap--reminiscent of the best Czech lagers--is the perfect accompaniment.

I cannot seem to eat in any Polish restaurant without ordering żurek (white borscht), and tonight was no exception. Żurek is a soup made with fermented (sour) rye flour, usually filled out with sausage, potato, hard-boiled egg, and seasoned with marjoram. Królewskie Jadło's is rather pallid compared to Christina's, and not nearly sour enough for my liking, but the side dish of mashed potatoes with cubes of fried bacon, meant for mixing into the soup, helped liven things up a bit. Much more satisfying were the królewskie placuszki, or "King's pancakes": silver dollar-sized potato pancakes topped with herbed sour cream and smoked salmon: 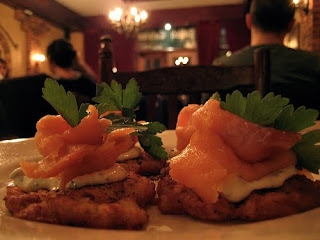 The stand-out main dish appears to be the golonka pieczona w piwie, or roasted pork hock in beer. It was excellent--an inspired way to deal with a pork hock--accompanied by a dish each of grated horseradish and a fantastic German-style mustard. The gulasz wołowy, or beef goulash, is definitely not what I think of as goulash (but then again, goulash isn't what most people think of as goulash... that would be pörkölt)--it was a decently satisfying thick beef stew, with no discernible paprika flavor. The sides we tried were a bit odd: both the red cabbage and the sauerkraut were served cold. And I don't mean they had been allowed to get cold; they were chilled, and the sauerkraut, for my taste, had not been cooked enough in the first place. But the cardinal sin: nary a meat product contained therein. Definitely not my kind of sauerkraut. For 75 cents extra, you can get Polish-style dumplings with your entree, which are pellets of dense dough, boiled or fried as per your request.

The real star of the meal, though, was the final plate of jabłka w cieście: slices of apple dipped in a very light, sweet batter, fried perfectly, and served with powdered sugar and sour cream. Worth the trip to Greenpoint. I never had any nearly that good anywhere in the East Village.

The decor is kind of a hoot... there is a suit of armor stationed by the front door, and the imitation tudor and brick walls are dotted with caricature-like portraits, presumably of Polish kings. With the rather dim lighting, squint and you just might think you're in a medieval middle-European castle... maybe.

But for my sauerkraut fix, it looks as if I may just have to give the Christina's in Greenpoint a try. [Ed.: Tried it and no dice. Królewskie Jadło serves significantly better food.]