Another stunning meal at M & T Restaurant with Jennifer and Jose this evening, with more pictures by Jose (check out his Flickr photostream). As in the previous visit, every dish we ordered was utterly unique in some way... the meal really felt like an adventure from beginning to end. It's impossible for me, as an American who has never visited China, to know if it is because the cooking of Shandong province is sui generis (is it so very unlike the food of other parts of China?) or if the proprietors are really just cooking for their peeps and not changing a thing for us Westerners. In any case, it's an adventure worth embarking upon. 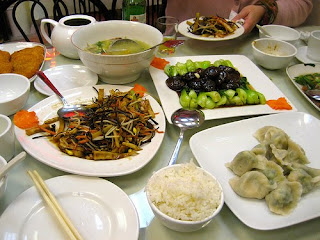 We felt it was our duty to order the dish that showed up on every other table in the restaurant during our previous visit, sea worm with Chinese chives: 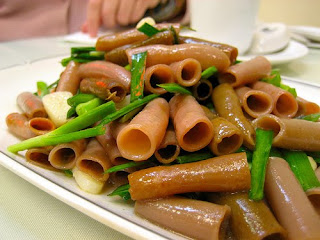 I don't know what I expected sea worm to taste like, but the flavor was still something of a surprise: light, slighty briny, definitely "of the sea" but not overpoweringly so. The sweetness of the chives was the perfect flavor counterpoint, and the lightly resilient texture of the sea worms was quite pleasant... a lovely dish. "Sea worm" goes, apparently, under a variety names: spoon worm, naked sea cucumber, sea intestine, even "sea chicken", and, for you scieintists, urechis unicinctus. Koreans (who call it gaebul) and Japanese eat them raw, and they are reputed to have a "male enhancing" effect. I wonder how much of that reputation stems from their appearance before cooking...

Jose and I were both blown away by the sour pickled cabbage and pork belly soup: 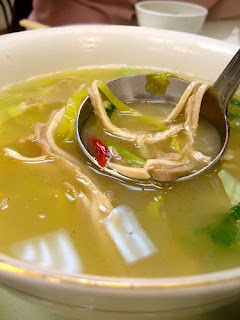 We both have had soups composed of similar ingredients in Chinese restaurants before, but never had they been so very flavorful and satisfying. The little red hot peppers floating around both filled out and clarified the other flavors.

The shrimp dumplings were both extraordinary and unlike any dumplings I have had before: 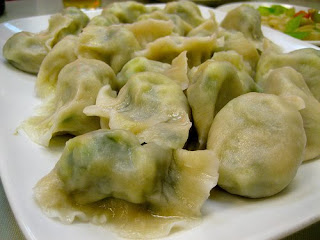 The filling, composed of baby shrimp, egg, and chive: 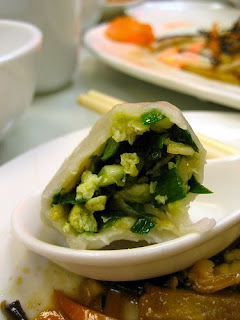 "Mushroom with Chinese Cabbage" turned out to be to baby bok choy with whole black mushrooms, in a sauce containing lots of garlic and some black vinegar--another excellent, well-composed dish. 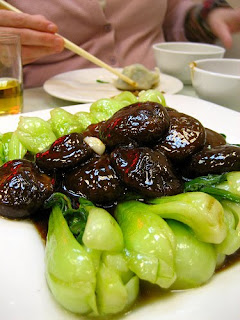