Another evening of deliciousness at the wonderful M &T Restaurant, and the table was once again populated with dishes unlike any I had eaten before. Always go here with as many mouths as you can gather, because you'll want to try as many dishes as possible. This time it was Jennifer, her visiting father, and Jose (who, as usual, has contributed the beautiful photos).

It definitely pays to check out what ones fellow diners are eating... otherwise, it never would have occurred to me, as much as I love sausage, to order the homemade cured sausage. They come in two "flavors"--slightly spicy, and slightly more spicy. We, naturally, got both, and they are even more delicious than they look: 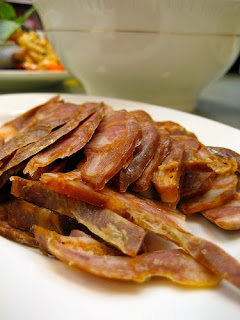 The sour pickled cabbage and pork belly soup from the previous visit was so delicious we ordered it again, as well as more boiled dumplings--this time, the "three delicious" variety. While the ingredients--baby shrimp, ground pork, and chives--aren't quite so distinctive a combination as the baby-shrimp-egg-chive variety, they're every bit as delicious.

"Feihong Chicken Slices" is a dish named after... a snack food! Which was named after a Chinese cultural figure. (A tip of the hat to scoopG over at the Chowhound boards for background info.) I don't know who thought of adding party mix to a stir-fry dish, but the result is tasty and fun: peanuts and red peppers baked until crisp, added to lightly-breaded slices of chicken, with garlic and, of course, some more red pepper added for good measure. Basil leaves are the final touch of genius: 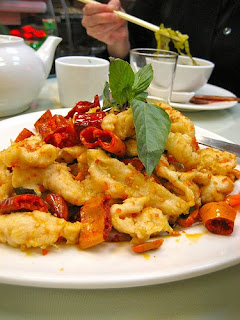 Yet another dish unlike any I have tried before is listed as "Fried Beacon (Spiced & Pepper)". "Beacon" turned out to be a charming misspelling of "bacon", but in fact it is pork belly. Strips are battered, more or less tempura-style (but then again, it could be beer batter--Qingdao is the home of Tsingtao beer, after all!), fried... 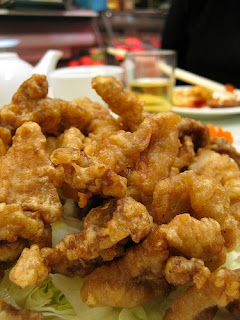 ...and served with a dish of crushed Sichuan peppercorns mixed with salt. 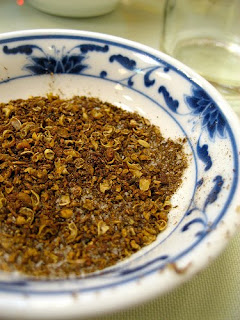 The resulting combination is bliss: 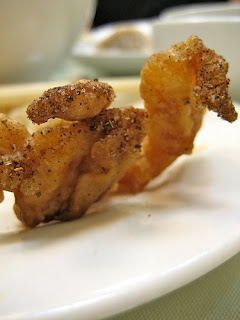 The seafood fried rice, ordered as an accompaniment to the above delicacies, was chock full of moist, tasty bits of squid and other fruits de mer. I'm not much of a beer drinker--at least not with food--but Tsingtao beer (even though the pitcher says Bud Light) really was the perfect accompaniment to all of this. 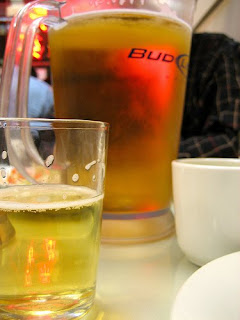 I'm also not much for Asian desserts, especially the ones that contain sweet bean pastes, so when the waitress suggested the "Bird's Nest" dessert, I was more than a bit dubious. And once again, something showed up that was unlike any dessert I had ever experienced before: 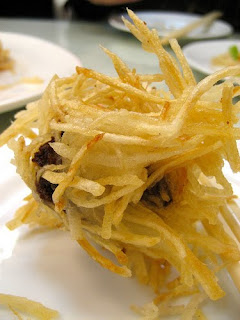 Lumps of sweetened red bean paste, wrapped in shredded potatoes and fried to perfection. They really were extraordinary, and much lighter than I would have thought possible.
Posted by Mahlzeit! at 12:36 AM