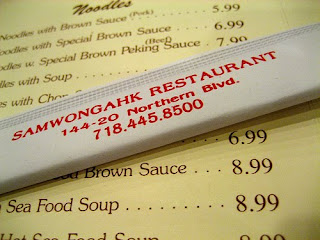 My meal at Hyo Dong Gak last week made me curious to revisit the first restaurant I ever found in New York that served jja jang myun made with hand-pulled noodles, Sam Won Gahk. The location I used to go to in Elmhurst closed a few years ago, alas, but the Flushing/Murray Hill outpost is still going strong.

These two appear to be the best-known purveyors of hand-pulled jja jang myun in NYC, and, in terms of quality, I would have to say they are comparable. The fried mandu at Sam Won Gahk have a slightly more flavorful filling, but are otherwise similar to Hyo Dong Gak's (even they aren't quite so huge). 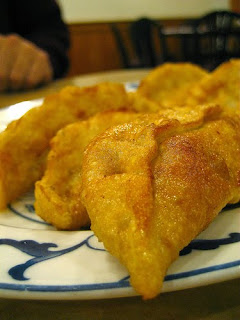 I have no firsthand knowledge by which to judge whose jja jang myun is more authentic... it may simply come down to taste. I can tell you the noodles at Sam Won Gahk are a bit firmer, a bit more like fresh ramen noodles--Hyo Dong Gak's are a bit "springier". 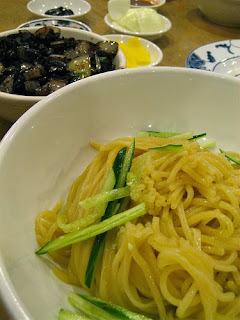 While HDG's sauce ends up being somewhat on the goopy side, I ultimately prefer the flavor to SMG's--it's a bit more "filled out" and mellow. This evening, my friend Jose got the item listed as "noodles with Peking meat sauce"--the same noodles with a similar sauce, but made with minced beef instead of than pork. I liked it rather better than my gan jja jang. 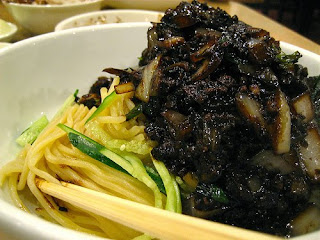 Bottom line: you'll get a great, cheap meal at either place. Sam Won Gahk also has a location at 21901 Northern Blvd. in Bayside, Queens.